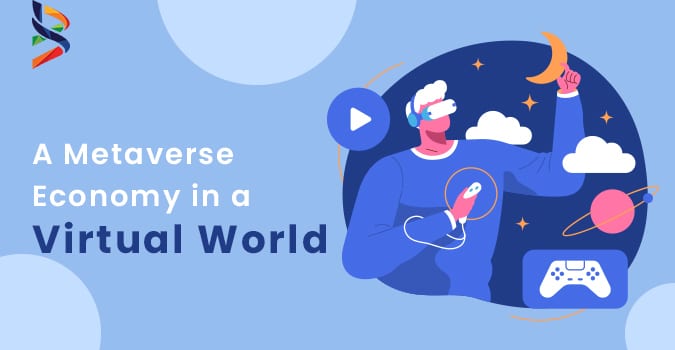 A metaverse economy in a virtual world

Metaverse or “virtual worlds” are one of the most enthralling areas of the crypto-ecosystem because they blend two new technologies: cryptocurrency and virtual reality. The three biggest Metaverse games according to the volume of trading — as well as the majority of other indicators comprise Decentraland, Somnium Space, and Cryptovoxels. While this isn’t the most crucial indicator, it shows the games’ speculative nature as the games are in the beginning stages of creating their virtual communities as well as their economy. If virtual worlds adhere to a “winner gets the most” principle of value calculation then the most popular platform’s virtual space could be worth something in the near future. In other words, is enough space in virtual reality for multiple platforms to be able to coexist?

A brief introduction to the Decentraland Metaverse

Projects like Decentraland, Cryptovoxels, and Somnium Space combine virtual reality (VR) as well as a variety of cryptographic techniques like smart contracts, NFT and others to build virtual worlds that are scarcity-free in the mind. The land that is part of Decentraland’s virtual world is tokenized and comes with an equivalent non-fungible token known as LAND, which functions as ownership rights. A number of parts — or parcels of LAND are able to be combined in order to form an actual estate (EST) which can increase the size of a specific digital property. Anyone is able to build and sell their digital property no matter if they want to build an online casino or art gallery.

Decentraland also utilizes its own asset, MANA that can be used to purchase LAND.

MANA tokens can also be used to purchase items in-game and services.

Decentraland is a rapidly growing economy, which is surrounded by the uncertainty of its expansion. The land that Decentraland owns -which are NFT tokens as well as digital land plots in the Decentraland Metaverse as well as other NFTs have generated more than 75,000 sales and a value of close to $25 million.

The beginning of Decentraland sales has shown an increase in sales, likely due to large individual purchases. However, the USD increase is slowing this year and sales are likely to grow, with many smaller deals coming to light.

Initial sales reveal the initial purchases made within the weeks following those Decentraland Metaverse Land offerings.

Initial sales comprise around 24% of the total dollars sold, with the largest portion of which occurred in December of 2018. This is a perfect illustration of the intense speculative excitement that came with the first distribution of land across the Metaverse particularly since the construction of Decentraland was a technical challenge that required more capability until the most recent launch of the Builder tool.

The growing second-party market that Decentraland has for its NFT tokens is evidence of a lively crowd that’s grown significantly since the introduction of this project. Decentraland has put forth an effort to improve its influence within the NFT community.

While OpenSea is the biggest NFT trading site, Decentraland Marketplace has started to extend its offer beyond the land market and currently provides NFT from Known Origin as well as super rare. This is a smart move from Decentraland since the platform is second in terms of sales per year and is consistently among the top 10 by weekly sales.

Decentraland is also home to a lot of NFTs that amounted to over 1554.84 Ethereum, according to OpenSea.

Decentraland was founded in 2009 and was able to raise 86,260 Ethereum ($20 million at the time) is likely to have substantial inventory. The company has established decentralized ownership through the launch of Aragon DAO. Decentraland DAO currently controls various contracts that are related to Decentraland and is also responsible for managing the plans that include whitelisting new NFTs, making decisions about future LAND auctions and more.

The introduction to MANA -the Decentraland’s assetused to serve as collateral in MakerDAO store purchases in July could prove to be a significant move for the economy of Decentraland. While the need of MANA secured loans is not high currently, the possibility to utilize Decentraland’s currency in the world outside of virtual reality provides added value to customers and also increases MANA tokens’ security. Imagine that MANA becomes a dependable type of collateral. In this scenario it’s possible that in the near future MakerDAO will be in a position to accept LAND to be collateralized, and this could lead to various interesting dynamic. For instance, a customer can use their virtual property up as collateral for the DAI loan through Maker and this could be a true indicator of the success of this digital society. To facilitate this, Decentraland already offers mortgages that use Ripio Credit Network smart contracts for payment. If Decentraland gets to the point that LAND owners make a substantial amount of money and demand for mortgages will grow. But, Decentraland is still way ahead of the curve and will need to achieve substantial users growth before more complicated financial transactions be an actuality.

Decentraland has been awarded a number of prestigious prizes for its initial launch in February of 2020. It has attracted more than 12,000 people. While some of the users have completed transactions on-chain however, the amount of transactions using MANA tokens has significantly increased. Additionally, the growth of the network, within which new users have appeared in the last year has been notably increased particularly during the launch, and in conjunction with the rising prices for MANA that could indicate the rise of new MANA investors.

While Decentraland is still a leading platform in the virtual ecosystem, two other ones have seen growth over the last year.

It was established in the year 2017. Somnium Space is a cryptocurrency that offers features similar to Decentraland and utilizes it’s Somnium Space Cubes native token. Somnium was able to raise $1 million during the form of a seed round in June and saw significant speculative growth in the last year, boosting the volume of trading by over 700 percent.

Even though the total Somnium volume is still low in comparison with Decentraland, Somnium is ahead of the massive Metaverse in terms of weekly trading volume. This could be a hint of the future for Somnium or just the result of an ebull market which is beginning to move towards the NFT environment.

Cryptovoxels, founded in the year 2018, is the newest game that has begun to establish itself in the market by launching digital art galleries. A brief introduction to the game reveals a variety of virtual art works that are viewable with both 2D or 3D.

Cryptovoxels owns 3663 plots land with 702 addresses. Cryptovoxel Metaverse consists of Origin City that is part of the Corporation and also “plots”, which are held by private users in the form of ERC-721 tokens.

When Cryptovoxels experimented with it’s own currency, the organization took the decision to eliminate it and instead use stablecoins, like DAI to make payments within the virtual realm. Similar to Decentraland as well as Somnium, Cryptovoxels has other mobile NFT products that can be traded between users.

Today, the majority of plots are located within Origin City, although other islands — which are large digital points that are adjacent to Origin City — are growing. Cryptovoxel distributes new material via OpenSea every

Metaverses can generate enormous economic value due to a combination of interactions between people and legally codified property rights. The nature of the early virtual economies and worlds makes them purely speculation. Everyone doesn’t want to own a piece of land in a place that no one has ever visited. It is more affordable to purchase a domain at the 3rd or 4th Google page if they were to do.

If you are evaluating the long-term potential of virtual worlds, as well as other protocols that incorporate the latest technology and cryptocurrency. It is crucial to examine speculative growth with demand from users. If a certain area, like casinos or digital art galleries that are popular in Decentraland or another Metaverse, it could have significant growth opportunities. As it stands, Metaverses are looking for products that are compatible with the market, and finding it is a lengthy and tiring process.