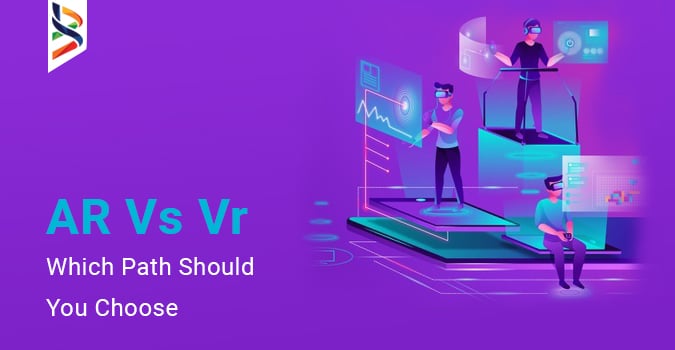 AR Vs VR Which Path Should You Choose?

These immersive and interactive technologies are constantly evolving. AR and VR are becoming more mainstream.

Which choice is best?

Virtual Reality: What is it?

Virtual reality (or virtual reality) is a type of computer technology that allows users to interact with 3D space in a simulated environment. VR hardware isolates the outside world and simulates human perceptions. It also provides haptic feedback to allow people to be immersed in an artificial environment.

VR has been a novelty in video games and movies for years. VR has become an integral part of many industries.

You can take the Volvo reality app for a test drive. Walmart uses a VR training application to help managers learn in a stress-free setting. VR games are another multi-billion-dollar market.

How to start developing in virtual reality

These are the four main areas you should explore when creating a VR project.

You will need to have a high-performance hardware capable of running complex computations and advanced graphics in order to develop VR.

A VR headset is a second requirement. There are many VR headsets on the market with different performance and prices. These are the top VR headsets to help you create an engaging and convincing virtual world.

While you can still use pen and paper for basic ideas, you should be able to work with digital tools if you are serious about creating them.

1. Sketch or Figma: Create user flows and interface screens using Sketch. This plug-in allows you to turn your Sketches into a 360-degree view.

3. 3ds Max and maya – The industry’s gold standard. These are great for modeling, sculpting and animation. These tools can be expensive and require a lot of learning.

4. Cinema 4D – A user-friendly alternative for Maya that can be used by small groups and individual artists.

The game engine is essential because it contains the necessary framework and software development kit (SDKs), required to create VR applications for a computer or mobile device.

These are the top contenders.

1. Unity – Unity is the king of VR engines and the preferred choice for 45% of developers. It supports all major VR formats and devices, including 3D Max and Cinema4D, using C# to create commands.

Unreal Engine and Unity are the market leaders in game engines. They are almost neck-and-neck in practice. You can compare Unreal vs Unity to help you decide which one to choose.

An SDK plug-in is an extension that provides engine- or platform-specific content, assets, and design techniques to enhance the native VR experience.

What is Augmented Reality?

Augmented reality (AR) is a technology that alters the way we perceive the world in order to make it more interactive. AR does this by overlaying digital information on a real-world view.

It is best used for enterprise tooling. AR smart glasses can be used by workers in manufacturing to view text, stats and graphical representations as they work on a task.

VR is great for gaming but AR is what made Pokemon Go so popular. Forbes once called it the ‘world’s most important game’.

How to start developing in Augmented Reality

To develop AR experiences, there are several steps you need to take.

You’ll see that AR medium has significantly fewer options for development than virtual reality when you compare the hardware. Your mobile phone is powerful enough to run AR apps for mobile phones.

These applications are available before you start:

HoloLens Emulator: This allows you to run Windows Holographic with the HoloLens emulator. This will only work if Hyper-V is installed.

These SDKs are available for AR development:

1. HoloToolkit – A collection of scripts, components and tools to help you develop your HoloLens project faster. For installation instructions and tips, see this GitHub guide.

2. Vuforia: Use this to create Holographic Applications that recognize objects in the surrounding environment.

Augmented Reality vs Virtual Reality: Which one should you choose?

Augmented Reality is the best option for developers if you are looking to create apps or experiences for:

Virtual Reality is the best option for developers if you are looking to create apps or experiences for:

Augmented Reality vs Virtual Reality: There’s no way to lose

Although AR and VR have been slow to rise, they are now promising in many industries.

This is the right time to get involved. Start small to build your skills and knowledge with the software essentials and expand your developer portfolio.

You can’t lose when it comes to choosing between virtual reality and augmented reality.

Are you interested in XR Unity or learning more about AR and VR?