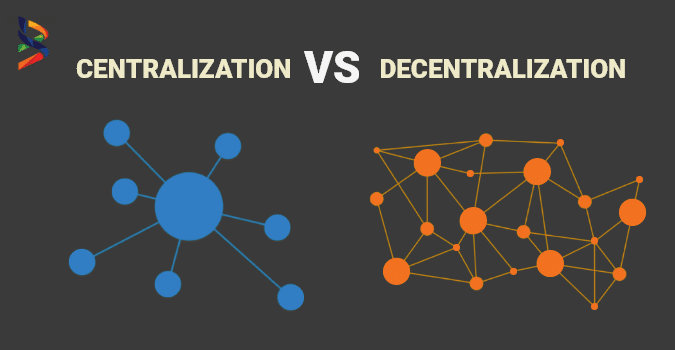 A central place or group of management personnel to plan and make decisions or carry out the activities of an organization is referred to as Centralization. In this type of business all of the key powers and rights are the responsibility of the management Centralization vs Decentralization at the top.

In the past, centralization was the most frequently used policy in every company to ensure that all powers remain in the central office. They are in complete control of the actions of lower- or middle-level management. In addition, personal coordination and leadership can be observed because work is efficiently distributed among workers.

There are certainly many advantages or benefits of centralization. These are described below.

All of this means that delegation is simple in the chain. Executives can delegate tasks to their subordinates and ensure that they complete the task in the most efficient way. If the work is successful it builds a sense of trust between the employees and the chain, increasing the trust needed for the task to be successful.

In a centralization-based network one central node or collection of nodes are accountable for the verification of transactions.

One of the greatest benefits that centralization offers is price that comes with it. A centralized network or infrastructure will require less maintenance and is less expensive. Because centralized organizations and networks are planned out, the expenses that are associated with them do not exceed budgets unless absolutely necessary to extend the network.

It is no question that centralization organisations or networks facilitate quick decision making. Since centralized networks contain fewer individuals or nodes and require less communication between the various types of authorized levels.

Additionally, if a central network decides to introduce an alteration, it will be completed within a matter of minutes. As an example, a central network could put greater stress on the KYC procedure and decide to include more requirements to it. Since it is centralized, the networks are able to promote the new guidelines or modify the KYC procedure that could be implemented almost immediately after adequate testing.

There are a myriad of negatives of centralization. A few of them are listed below:

Although centralized companies are safe and trustworthy, they aren’t 100%  secure or reliable. The trust is an agreement between the service provider as well as the user.

But, it’s an agreement that isn’t always a good thing and can be broken easily. Big companies face trust issues with their customers at times.

It occurs when there is a lack of security in the system. People are prone to not pay attention to the service for a period of time until the service provider restores the trust by providing solutions and compensation for the affected.

All this is due to centralization and the reason all data is stored in a central database.

2. One source of failure

Centralization also implies that the entire infrastructure is dependent upon one source of failure. The companies are aware of the drawbacks and have taken measures to mitigate the issue. But, the fact that there is a risk of failure is a major disadvantage for mission-critical services.

Because a single server will be typically used that results in scalability limitations.

What’s the state of Centralization?

Centralization is certainly an efficient method of managing organizations or networks. It is used successfully by major organizations like Microsoft, Facebook, Yahoo and others. Actually, our government agencies are also dependent on a central method.

If you have an centralized government, the executive officers of the political party coordinate their power. It is also possible to exercise the power in various situations.

It is easy to say that centralization remains widespread in the present market. It is true that not all businesses do need to embrace decentralization simply to be able to do it. Different business models work best within a centralized network, and it’s going to take time before more and more businesses shift to decentralized models.

The delegation of authority and responsibilities of the upper management level to the lower or middle-level management is referred to as decentralization. It is the exact alternative to centralization, where the power to make decisions is transferred to departmental, divisional or center-level managers all across the organization. It can also be described as an additional aspect to delegation of authority.

In the present, because of the increasing competition, managers make the decision to allow delegating authority to subordinates. Because of this, functional level managers are given an opportunity to be more effective and also have more flexibility in work. Furthermore, they are able to are accountable to the top managers, which leads to quick decision-making and savings of time. It’s a highly efficient method for expanding the business, for example, the mergers or acquisitions.

There are many benefits to decentralization

One of the biggest benefits of decentralization is that users are completely in charge of all transactions.

It means that they can begin a transaction whenever they wish without having to obtain authorization by a central authority. In simple terms , the verification process does not depend on third parties and a decentralized system uses consensus methods to verify data.

2. Data cannot be altered , or deleted

Blockchain technology’s database structure can only be appended. This means there is no way for anyone else to alter or modify data after it has been stored. Another blockchain technology that makes use of various data models, such as Corda however they also adhere to the immutability principle.

The security of decentralized networks is due to the way they handle data and transactions. They employ cryptography in order to make sure that data ledgers are safe. Additionally, the data in the block currently being processed require information from the next block to be able to use cryptography to verify the information.

Twitter for instance, is known for its censorship of accounts when it discovers objectionable posts, or when the government wants to shut down accounts if it is against their plans.

With decentralization peers are able to interact directlyand there is no restriction on communication.

Decentralized networks generally support open development. This is due to their nature and the way it operates. With the ability to create an environment for development that is open, the network is able to access incredible tools, services and products that are built on top of it.

Linux for instance, is an open-source software and an ecosystem that lets anyone enhance it. Similar is the case for networks that are decentralized. Contrary to this, a central network or closed solution does not have the opportunity to develop in an open manner. This hinders development to a large degree.

Decentralization may cause conflict if it’s not properly maintained within an organization structure.

Cost In an organization environment, decentralization could cost more than centralization since it requires the establishment of systems that help in making communication more automated.

When blockchain technology is decentralized it is possible for crime to be a big drawback. Because everything happens through the network, it is completely confidential, it can result in misuse.

The decentralized cryptocurrency has a volatile behaviour with prices that fluctuate quite significantly!

What is the state of affairs of Decentralization?

Decentralization is in the air. It is evident that a lot of large organizations, companies and even government agencies are embracing it because it improves the efficiency of the network over the long term.

Dubai is among the first governments currently using blockchain technology to the entirety of its governance system. The term is now used to describe the capital of blockchain development because the decentralization process as well as the blockchain tech has a significant impact on the way in which it operates.

IBM is in the forefront of adopting blockchain technology, and is employing it to enhance the quality of food distribution chain.

They have created IBM Food Trust, which is about improving efficiency and transparency in Food supply chain. They’re working with Walmart and will benefit all members of the network with accurate and traceable data.

There are also a variety of decentralized ledger projects available such as Hyperledger, Corda and many more.

The most evident applications that decentralization can be used for is in one of its most obvious applications is the payment method. In the end, the idea was born with the advent of bitcoin, which was the first time that a currency was decentralized.

Every currency in the world controlled by banks operate on an underlying server that is centralized. This way they are in complete control over all operations and are aware of your financial activities.

This means that they have information the habits of your spenders. But, one of the most dangerous aspects of having a central currency is that if someone does get the bank’s credentials it is possible for them to gain access to the entire amount of money you have and use it to their own gain.

Another drawback of centralized payment system is that there may be a failure or disruption and you won’t be allowed to access your funds in the event you require it.