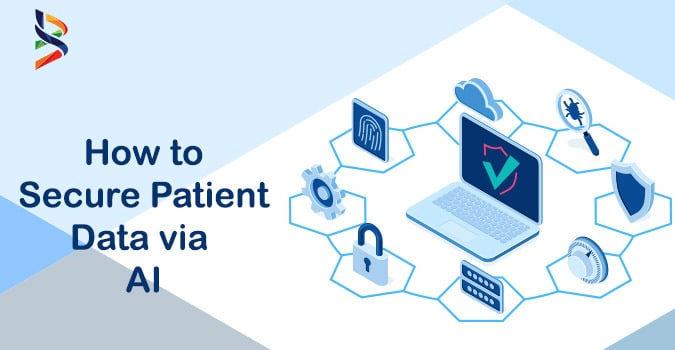 How to Secure Patient Data via AI?

This is a shocking statistic that health data is much more valuable than credit-card information sold on black markets. With hackers becoming increasingly interested in these lucrative databases It’s not a surprise that cybersecurity is a top priority for Secure Patient Data via AI.

Machine learning and artificial intelligence are helping hospitals across the globe reduce administrative burdens and improve outcomes. Today, AI is being used in cybersecurity to assist human efforts and guarantee the security of patient data.

Naturally, AI implementation in healthcare security isn’t without its challenges and threats. AI applications, which operate to attack security systems, pose an increasing danger. To protect data and ensure the security of patients, focusing on the issues that need to be addressed is essential.

Here are four ways Secure Patient Data via AI tackle the security issues that plague healthcare data and protect hospitals and medical device networks, both now and in the future of healthcare.

For many years, IT security has relied on the detection of signatures of malicious software. The issue with this method is the fact that it’s reactive. the breach must be discovered before the attack can be stopped at a later date.

Nearly one million malware attacks emerge each day, each sporting an entirely new digital fingerprint. This is outpacing conventional security measures, and skewing the advantage of attackers against attackers. In the end, viruses only have to perform once, whereas security systems must work every time.

With this level of attack that hospitals are facing, it’s easy to see why they are frequently the victims of security breaches, even with the most advanced security measures in place. It’s estimated that around 15000 patient files are breached each day. This amounted to a total of five million records of patients that were breached throughout the year.

The consequences of Secure Patient Data via AI breaches are huge and On the basis, each compromised data record is costing hospitals $380. Based on simple math is it’s that U.S. hospital systems are losing more than $5 million per day to data breaches which do not include the damage to the trustworthiness of hospitals. A study found that half of the respondents said that the loss of data could undermine their faith in their healthcare providers or force them to change their providers.

The human cost of stolen patient information is harder to quantify, but it is more troubling. Health information isn’t protected from fraud as credit reports are which makes medical identity theft extremely difficult to overcome. Additionally, in the event that security breaches cause false records for patients, they are at risk of serious health issues.

Machine learning applications can assist in preventing these security breaches by constantly seeking out previously unknown malware signatures. By using historical data, AI apps can recognize malware patterns, even if the malware’s destructive characteristics aren’t prior to being identified.

But, there are obstacles to the wide-scale adoption of this technology within healthcare IT. Particularly, automated processes will require access to large health data sets that are usually protected by HIPPA regulations.

A significant improvement in Secure Patient Data via AI programs has been achieved since 2019 however. In the end, AI has already proved to be successful in increasing security measures in other fields.

Continuously developing apps to improve the capacity of hospitals to respond quickly to threats will become increasingly vital as cybercriminals develop their strategies.

The lesson to be learned:

Secure Patient Data via AI is about the ability to see; you can’t shield yourself from threats that you do not know about. Machine learning is one of the best ways to make previously unseen threats more visible. Making investments in this technology is crucial to safeguarding healthcare information from dangerous, new and widespread cyber-attacks.

If a security breach should happen, AI helps identify and eliminate threats much faster than traditional security measures.

AI constantly and automatically examines the network’s behavior by identifying anomalies when they occur.

Behavioral indicators are a powerful tool to detect malware. For instance, suspicious events like an employee’s account immediately accessing 5,000 patient records around 4:00 a.m. The events generate patterns of behavior that AI is able to recognize.

When the threat is identified, Secure Patient Data via AI technology can either transfer the situation to a central supervisor or be programmed to autonomously take action to minimize the impact of the incident, if certain conditions are satisfied.

For instance, AI-powered automation can detect and segment traffic in order to separate sensitive information according to certain security standards. This can ensure that compromised devices don’t transmit the virus to the entire healthcare system.

AI can help to quickly detect anomalous behavior within networks and then act to stop it. Implementing AI technology enhances human oversight as well as extends existing security tools, helping your organization to stay at the forefront of security breaches while minimizing the impact.

Medical devices that are smart pose significant risks to the safety of patients in the event that they are not protected from remote intrusions. AI will help to overcome the most difficult barriers in securing these devices.

There are at present 3.7 million connected devices for medical use that are in use across the U.S. This equates to around 15 devices in a typical American hospital.

Defibrillators and pacemakers insulin pumps and other medical devices provide immense benefits to patients’ health. However, according to research, many of them are at risk of being targeted by hackers. hundreds of thousands of these devices are publically identified as well as over three per cent are currently running old operating systems that do not more receive security updates.

Medical electronics, including implants as well as larger equipment such as scanners or MRI machines usually designed by third-party providers who employ a variety of operating systems as well as proprietary codes. This makes it challenging for hospitals to evaluate the security of their equipment.

Hospitals are accountable for the security of the gadgets they provide to patients, however, they do not have complete oversight over measures to secure their devices that protect patients while using these devices. There are vulnerabilities that have been demonstrated on a number of these devices that may cause data to be compromised or affect their performance. The magnitude of the risk is difficult to estimate.

If the devices are not adequately secured in the future, cyber-attackers will be able to exploit weaknesses within these gadgets to attack patients, their information and even the hospitals with which they’re connected. Fake medical devices can be placed in hospitals’ networks, impersonating devices such as CT scanners and MRI machines and used to connect to the network and close it down or to hold it hostage in ransom.

In reality, 90% of hospitals reported that they had suffered a cyberattack within the past five years. of these attacks, almost 20% were caused via IoT equipment.

Hospitals must be vigilant in protecting themselves and patients against vulnerabilities in medical devices in the coming days. Artificial intelligence is an untapped resource to evaluate the quality of information gathered via connected devices and the control of the access that these devices can have to the hospital’s network.

Expand the human capital and tackle the issue of security

The sheer number of possible dangers can overwhelm security personnel making them less effective and leading to burning out.

There is a shortfall of IT security experts. Based on CIO Magazine, more than 30 per cent of healthcare administrators are forced to delay or cut down on the scope of an IT project because of staffing issues. Even when IT experts are on hand to be hired, they are expensive and can be a major expense to the resources of hospitals.

A lot of the current IT security measures are only effective when there is a person watching the system at the moment incident. The employees need to be meticulous and continually review access logs in order to detect and stop any unauthorized activities.

How Much Data is Needed to be Controlled?

Some companies are aware of over 100,000 potential security incidents every single day. The sheer number of possible dangers can strain security personnel which can reduce their effectiveness and lead to burning out.

Yet, hospitals under attack must be able to quickly assess potential threats and triage them.

In 2016 IBM discovered that security systems in the average business cost more than $1.3 million and more than 21,000 working hours of their time due to false positives each year.

AI applications like IBM’s Watson are currently increasing the speed of routine security checks which reduces response times and the time it takes to hunt away false positives. They also help improve the processing of previous cybercrime records and offer analysts recommendations in light of their analysis of vast security data, allowing security personnel to concentrate effort on improving the security of systems and solving the most pressing and complex tasks.

The result is quicker decision-making and less pressure on employees. Beyond healthcare, businesses that use AI applications to expand their security capabilities are already seeing an enormous impact on the speed of response: IBM research found that the average time to investigate has decreased from 60 minutes to one minute for early adopters.

AI solutions ease the stress of IT security gaps in staffing and increase the capabilities of security teams already in place. Automating IT security functions is a quick method to minimize financial risk from cyber attacks as well as make use of human resources more effectively.

Cyberattacks cause hospitals to lose $6.2 billion annually and pose a grave risk to administrators and patients alike. As a result, nearly 90% of healthcare executives are using anti-virus software that is traditional However, this isn’t enough to guarantee security.

AI-driven security tools don’t have the power of magic but they’ll soon be an essential instrument for executives to use for an efficient modern, contemporary security system. Although there are some obstacles to the implementation of AI, AI technology currently on the market can help hospitals’ cybersecurity teams:

In the near future, the implementation of AI-based cyber defences will be vital for healthcare providers to protect themselves and react to cyber threats while keeping patients ‘ data and patient information safe.