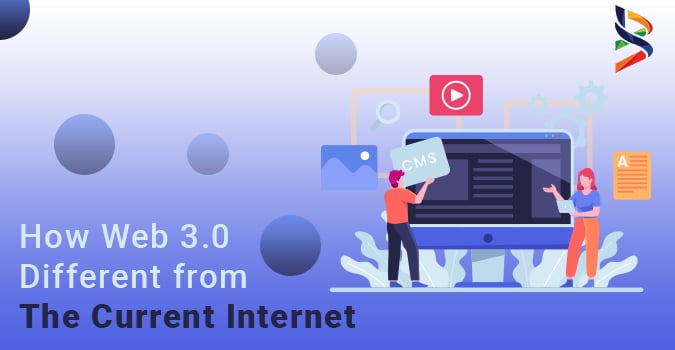 How Web 3.0 Different from the Current Internet?

The Internet is certainly the most significant invention in the history of mankind. Even though it’s been around for over 20 years, the Internet is a long way from achieving its full potential. Some believe that the Internet’s present state is similar to the automotive industry of the early 20th century and it needs major changes. Imagine an Internet that doesn’t just follow your instructions but also understands and makes sense of what you send to it via text or spoken. An Internet that delivers results that are tailored to your preferences better than before. Some call it the Internet also known as Web 3.0.

World Wide Web inventor Tim Berners-Lee referred to it as”the Semantic Web (interconnected data). Web 3.0 would be aimed to be more flexible, intelligent and transparent. It will connect all data in a decentralised manner which is a massive leap from the current system in which data is kept in centralised storage facilities. There will be two key components on which Internet 3.0 will be based on: semantic web , and artificial Intelligence (AI). In this configuration, computers must be able to comprehend the information conceptually and in context, and humans should be able to interact with machines.

What is the way that The Internet Changed?

The Web 1.0 (1989-2005) Also known as the Static Web It was the first web that came to existence around 1989. Although it offered limited access to information and a lack of interaction from users and a lack of user interaction, it was the most reliable source for web information during the 1990s. It didn’t have algorithms that could sort between Internet pages. This made finding relevant information extremely difficult.

The Web 2.0 (2005-present): the growth in social media sites has made it possible to make the Internet significantly more interactive. HTML was also a factor in its huge popularity. Businesses began to set up interactive web sites like YouTube, Facebook, Wikipedia, Twitter, Instagram pages. This began the process of creating content for users as Web.20 permits sharing of data between different platforms and apps.

The Web 3.0 (anticipated) The Web 3.0 (anticipated) is the next phase in the development of the Internet. In this stage when it’s expected to happen, the Internet will be more sophisticated and be able to process data as a human brain, using the power that comes from AI systems. Because the programs will be able to communicate among themselves without being controlled by humans on a regular basis and the generation of content would be highly sophisticated and its distribution would be targeted.

It is anticipated that Web 3.0 will provide a more personal experience when browsing and will contribute to an equitable Internet. When the infrastructure is in place it will bring about a series of technological innovations that give users more control over their information. It will also help to make the Internet more essential to our life. Many of the offline devices of today such as home appliances and transport systems are online and communicate with their servers that are autonomous.

Because Web 3.0 will operate through decentralised protocols that are founded upon blockchain technologies, it’s anticipated that the two technologies as well as crypto will merge in a close partnership.

The Internet of the future is  web 3.0

Web 3.0 is in many ways an attempt to return to Berners-Lee’s initial concept for The Semantic Web, where there is no need for permission by a central entity, and there isn’t a centrally controlled node.

In the same way that Web 2.0 was driven by advances that were triggered by mobile Internet, social networks Cloud computing and mobile internet, Web 3.0 will be built upon new forms of technological innovations, such as edge computing and decentralized data networks. blockchain technology, and artificial intelligence.

Although we are still waiting to see a complete transition to the Web 3.0 tech experts as well as blockchain experts have made optimistic predictions regarding how the future of the internet could appear. Here are some fascinating theories:

Web 3.0 could serve as an extension of various aspects that comprise Web 2.0. For instance, in the same method that developers develop an amalgamation of two or more programs currently is possible with Web 3.0 users would be capable of combining different programs and services on their own, to alter the way they utilize the internet.

Presently, a user receives information via the internet through a myriad of servers and databases situated in various parts of the globe. It is not surprising that more than fifty percent of these data centers are controlled jointly through Amazon, Google, and Microsoft. For Web 3.0, data will be stored on cloud networks that are decentralized as well as autonomous storage devices. This means that Web 3.0 will not depend on any central data hubs to deliver data to users. However, the construction of a robust data storage system that is decentralized is a major task.

Internet search will operate in a different way with Web 3.0. Similar to the personalized advertisements and feeds you can find through Facebook as well as YouTube. Utilizing sophisticated AI and machine learning, the search engine that is part of Web 3.0 will offer personalized results for every user in accordance with their preferences and needs. For instance, if a meat-eater as well as a vegan both search for “Best restaurants near me” in the bar of search, they’ll receive various results based on their personal preferences. Naturally, this implies that algorithms will learn better about our preferences.

As an individual user, you’ll have your own unique identity with Web 3.0 that will enable you to control and access all of your data, assets and services without having to log into a particular platform or asking permission from a specific service provider. You’ll be able to connect to the internet from any location at no cost and be the sole owner of all digital assets.

Alongside being able to experience the web in 2D users also be able to take part in a wider range of 3D-based environments. From any place, you could go to Web 3.0, which is a 3D virtual version of the historical site you visit, or engage in games while playing the game as the 3D player, and try on clothes on your avatar before purchasing. When you are using Web 3.0, you would also be able to experience time in a holographic 3D world in which you can collect or purchase virtual assets. With the integration in VR, AR, Semantic Web and AI all in one, Web 3.0 could offer more opportunities for interaction through the digital world as compared to Web 2.0.

There is no way to know when we’ll be able to have a fully-fledged Internet 3.0 however there are online communities such as Web3 Foundation, the Web3 Foundation, Ethereum Network, Polkadot, etc. that are involved in various initiatives aimed at bringing Web 3.0 to life.

Brisklogic suggest that the Web 3.0 architecture will require plenty of infrastructure and resources to be built, and it’s unlikely to be a simple task to establish an environment that can eliminate the monopoly of the big tech industry, or for Big Tech to just let it occur. Facebook’s recent announcements concerning the transition of its business into the metaverse suggests that we might get to Web 3.0 and discover that it is run by the same group of players that control Web 2.0.