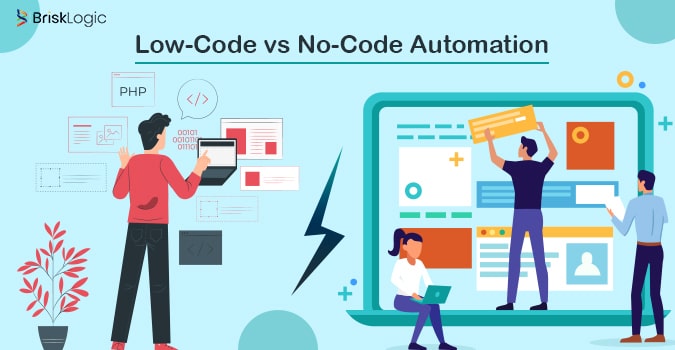 Low-code and no-code platforms are creating the biggest shift within technology and the IT industry in the last decade since Google Docs. cloud-based applications caused the majority part of the IT world to sit down and pay attention. They were forced by traditional IT providers to make changes immediately.

Now, this world of DevOps is being forced to pay attention to the latest youngsters on the block: low-code and no-code platforms that are poised to simplify software development to the point that virtually anyone can learn to code.

Do you have to create applications that can be used immediately? Perhaps it’s time to get away from the professional development world and choose a brand new platform that is low-code or no-code.

What exactly is “Low Code”?

Low-code programming can eliminate up to 90 per cent of the programming process. Low-code development platforms reduce development using cutting-edge drag-and-drop applications that the process can be simplified.

You can cut down on turnaround time

The need for specialized language expertise will not be an issue since all the foundational work is written. The development of applications can be done faster since skilled coders with specific capabilities aren’t needed.

If you have to create and release a lot of applications, low-code can help reduce the chance of bottlenecks in the process. Skills that are in high demand are not being stretched across all directions; the low-code platform takes care of the task for you.

Since the need for mobile app development services exceeds the capabilities of the industry Low-code platforms allow developers who are not developers to develop applications. Definitions of what constitutes a developer are broadened. Nowadays, even non-specialists who use low-code platforms can answer the demand for more apps, but without help from experts.

A Few Examples of Platforms with Low-Code

Some of the more effective Low-code platforms are Salesforce and Zoho. Both platforms let users develop their apps based on a variety of frameworks, for instance using Salesforce’s low-code platform for development Application Exchange.

With most of their code to their customers and customers, each Salesforce and Zoho permit clients to modify the content they present to their customers and their end-users. It is easy to develop applications in a hurry due to the minimum code requirements that allow a content management system, or customer relationship program to be implemented in a matter of minutes.

Definition no-code can be difficult in the issue of low-code vs. no-code. In the Gartner Magic Quadrant, Low-Code Application Platforms 2020 report grouped low-code and no-code into one. While it’s an entirely different style of application development, no-code development is thought of as a separate category of low-code.

The No-Code development platforms are gaining popularity because they let non-technical people develop apps along with other software. There is no requirement to write code in the app.

Instead, they utilize easy, intuitive interfaces typically with drag-and-drop capabilities. This makes developing applications an extremely fast process. There is no need to wait around for an application developer to design even the final 10% or so of an application.

The main benefit of non-coding platforms is that app developers can quickly respond to business requirements. Management of business processes doesn’t require traditional experts in programming to develop applications or tools.

Examples of platforms that do not require code

If you’ve ever employed Pipedrive to manage your CRM requirements, Agitable for cloud-based workspaces and Canvas to design graphics, you’ll appreciate the advantages of non-coding solutions. They have taken areas that usually require a significant amount of programming skills and made them accessible to the users.

Canvas is a fascinating instance. The rise in popularity has resulted in a platform that does not require code having a value of $3.2 billion. The market for solutions that do not require code is growing rapidly and professional developers might have to be concerned about their security.

How is Low-Code Affecting the Market?

It’s not difficult to see that low-code and no-code tools have had a profound influence on the market. As the knowledge of low-code/no-code tools increases, so does the anticipated market share and the value of these businesses.

In 2024 Gartner anticipates that around 65% of application development will come from no-code or low-level tools. Business requirements will be too urgent to be left to people who are fluent in a programming language to create everything from scratch. Instead, the business user will decide to take matters into their own hands.

Forrester shares the same view as Gartner and estimates that no-code and low-code tools can be valued at up to $21 billion by 2022. This staggering growth is due to a variety of reasons that we have already mentioned however the main benefits are speed.

Enterprises are looking to get their applications created quickly. But are they minimizing the risks when they do this?

Who is the one who needs to be changed?

The category that could need to undergo the biggest change is those who work in classic DevOps roles. While the need for traditional developers won’t disappear in a matter of days, there is the possibility of fewer jobs available.

This could help fill the problem of the lack of developer positions that remain vacant throughout the year, however, does it mean disaster for those who specialize in the field?

Perhaps, but it’s unlikely. While specialized coders who work in obscure languages or a specific field of framework development could be more or less “necessary” to a business, however, there will continue to be opportunities for them. However, the increase in the number of developers who are citizens is a problem for many working in the field.

In the end, there is it’s not a good idea. The platforms address one issue however, they could make you more vulnerable to dangers.

Some low-code platforms can be difficult to learn. While developing an app on a chassis of someone else’s is simpler in the short term, however, the long-term scaling of quality applications might be out of your reach.

These platforms might struggle to find a balance between efficiency and simplicity of creation. If it’s that simple, how can it manage complex tasks? This is why low-code applications may be only temporary solutions for business requirements.

Issues that have no code

Code is more troublesome than low-code due to two reasons:

Since no component of the platform was created by a programmer A non-specialist could commit mistakes that developers would never make. In terms of technical points perspective, having your entire code base developed by someone else can result in weaknesses or inefficiencies that create problems in the future.

This creates a huge amount of technical debt–issues that you’ll have to resolve, and could cause your company to be unable to use or even ineffective applications. As an example, the coding that forms the foundation of the app is packed with irrelevant or unnecessary filler.

Of course, the no-code options make it easy to accomplish whatever you want in a short time Members of your team could try to use unapproved or untested software-shadow IT “shadow IT” that may not be able to satisfy your company’s security and compliance requirements.

What are the Primary Differentiators Between Low-code and No-code Automation?

The difference between no-code and low-code platforms may seem blurred initially, however, there are some important distinctions:

The name says it all the platforms that are no-code don’t require any programming abilities. They use the same method as low-code ones, but they step the process up a gear. However, the low-code platforms enable developers to get deep inside and code any component they think is appropriate. They can be used to assist in speeding up the process but only for those with a solid understanding of coding.

Platforms that do not require code permit the end-user to control the design of automation processes using simple drag and drop operations. While low-code platforms utilize the same deployment model but ultimately, they are more reliant on code to design automated processes.

Low-code platforms permit non-technical users to automatize processes to a certain extent. Most likely, due to the lack of programming skills, they’ll require help to complete the automation plan. This means that a programmer or technical expert must be available to assist with automation. However, platforms with no code offer complete autonomy for the user because the user doesn’t require any technical skills to operate the platform.

Are Low-code/No-code Technologies the Future?

No-code and low-code platforms definitely can be found in the field of development. Gartner anticipates that they will become the dominant platform in just a few years. Not recognizing the benefits of these strategies can mean missing opportunities for businesses.

But no-code or low-code isn’t going to eliminate any need for conventional programmers shortly. Relying on third party services for all your development needs is an unwise decision, regardless of how helpful the platforms are.

Brisk Logic remains relevant at work, even though low-code applications may be able to capture the majority within the coming years.