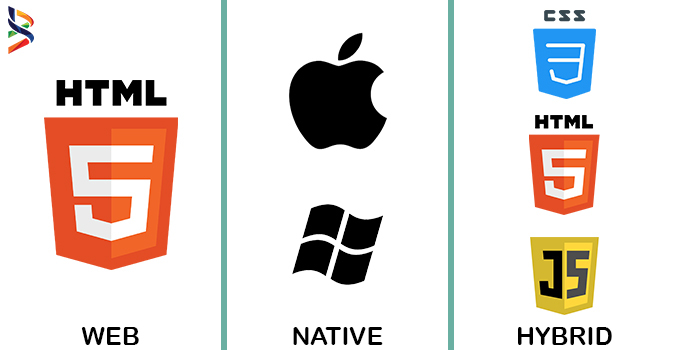 The answer depends on certain factors. These factors are a follows:

To help you decide, let us take an understanding about them and look at their differences, in order to understand which approach will be beneficial.

There are many arguments to support mobile App development for companies. Mobile Apps alerts can communicate with customers directly and ensure that they are up-to-date. Utilizing mobile apps in place of websites is also helpful in customer retention. Which one is the best?

There’s no need to fret If you aren’t aware of the differences between these three choices available to create Mobile Apps. This guide will help you understand everything you need about hybrid, native, and web-based applications.

The benefit of picking a native app is that it is the quickest and most reliable with regards to the client experience. Native applications can also connect with all of the device’s operating systems features, for example, the microphone, camera, contact records, and so on. Be that as it may, a huge budget is required if you need to build your application for different platforms (for example iPhones and Android) and to keep your native application updated. Brisk Logic has built many applications for their clients who wanted to build native applications.

Native Mobile Apps development for Android or iOS App Development requires the use of different frameworks.

Web applications are fundamentally sites with interactivity that feels like a mobile application. Web applications run in multiple browsers —, for example, Safari or Chrome — and are written in HTML5 and additionally Javascript. If your startup is on a budget and doesn’t require complex functionalities or access to operating system features, at that point building a web application can be the most affordable alternative.

Brisk Logic has developed many interactive web applications, which are user friendly and less expensive to build.

Supports a variety of Platforms If you create an online application it is easy to adapt it to any platform, and without spending additional time developing it.

Frontend Web Development Stacks: This front-end is often referred to as the client-side, provides the platform through which users communicate. The client component of online solutions includes an e-commerce store accessible via the browser. Graphical design, visual effects and usability of the user are the most important elements of a great front-end. To build the front-end the developers utilize an undefined set of tools referred to as the tech stack for frontends comprising HTML, CSS, JavaScript frontend UI frameworks as well as a CSS preprocessor.

Web Development stacks to the Backend Business logic and authorization, as well as database management and synchronization to the client application are handled by the backend that isn’t accessible to the end-users. It is composed of systems, servers and the software which run on it and is also known in the form of the server. Backend development requires the utilization of these stacks of web development components.

Brisk Logic has developed many hybrid applications using the latest advancements like Phone Gap and canvas.

The following are three of the most commonly used frameworks to enable hybrid Mobile Apps development.

Confused, which one to choose?

So as to settle on the correct decision, it’s imperative to understand the differences of every alternative as you’re going the correct way. Native, Web App ,Mobile Apps and Hybrid applications each have their own qualities and shortcomings, and your final choice will depend on your organization’s needs. Subsequent to thinking about your choices, it’s critical to work with app developers that can bring life into your thought proficiently and cost-effectiveness.

Whichever approach you pick should, most importantly, it should be speedy, responsive, and dependable. As clients are requesting more from Mobile Apps experiences, it’s essential to stay aware of their changing demands.