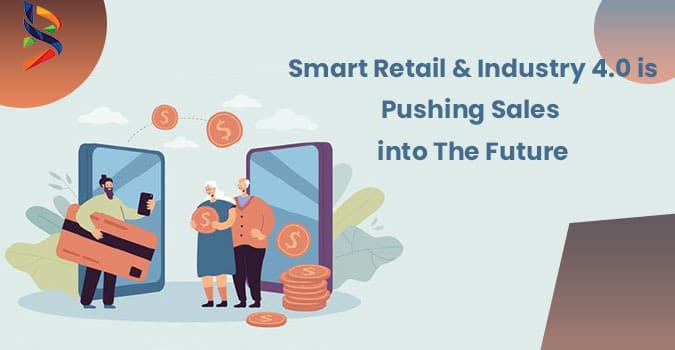 Smart Retail & Industry 4.0 is pushing sales into the future

Smart retail is a smart retail model that makes use of advanced technologies such as that of the Internet of Things, artificial intelligence, cloud computing and more. The result is optimization via the efficiency of machines and decentralization. Smart retail is already in use this practice is making significant changes for shoppers and workers.

Few people have had the opportunity to experience the concept of industry 4.0 or smart retail, but soon they will.

We were all taught of the Industrial Revolution during History class. From the assembly line to the shifting roles of labor and mechanization There is a common mental picture in our minds of the last century’s constant change.

This, however, is not the place where the story comes to an conclusion. With the rapid growth that involve mass production electric automation, computing technology, the retail industry overall has seen a variety of notable changes which include the industry 4.0 as well as smart retail.

In the last few years, we’ve been in a new stage of industrialization that is similar to an era of revolution. The term is “industry 4.0“, this massive industrial advancement is based on technology such as the “Internet of Things”, cyber-physical systems and cloud computing and cognitive computing.

In a simpler way industry 4.0 refers to the way our devices interact with each other and develop over time, improving the efficiency of operations and decentralizing. In actual practice, these revolutionary developments are most evident in a broader set of procedures that are now called smart retail.

What Is Smart Retail?

Smart retail is the combination of traditional shopping techniques and modern “smart” technologies. With the Internet of Things, data accumulates through communications between devices implanted and computers. In the end, customers could enjoy a more personalized more efficient, speedier, and better experience. This could be seen in personalized coupons as well as smartly-curated inventory.

In reality the greatest benefit of smart retail is its use of Artificial Intelligence (AI). The fact that a process has automation doesn’t mean it’s able to make complicated choices, particularly those which could have an impact on the company and its procedures, radical or not.

With AI being integrated into the process the ability to make decisions has now been made feasible. In this instance they’ll also undergo constantly self-correction and improvements. It might sound similar to The Avengers’ Ultron, however, the reality is that the smart retailer and industrial 4.0’s applications should not be taken lightly. Instead, their capabilities as well as their benefits and overall impact ought to inspire everyone to join in the revolution!

What Are Smart Retail’s Features?

The introduction of processes that are smarter than traditional retail has transformed the entire landscape of the sales sector. Indeed, many traditional retailers and industry experts have realized that the concept of industry 4.0 smart retail, as well as their key characteristics as the solution to various issues in their lines of business. Decentralization, optimization, as well as transparency, as an example each play a vital role in this solution.

Decentralization, in all settings relies heavily on the security across the board in order to be able to trust that efficiency and overall decision-making is maintained with no oversight from management. Similar is the case for smart retail in that it is not dependent on intervention from the human side and can optimize and modify its processes with the power of automation.

In the context of the smart retailer, transparency means the availability of relevant information throughout the entire supply chain. With data readily available at every level, the human manager as well as computers will have the ability observe patterns, make more precise choices, and spot mistakes before they be discovered.

Smart retail, through proper optimization, can benefit from its transparency and decentralization to be more flexible and flexible. This means that smart retailers will not only be able to adjust without difficulty however, they’ll also be able react to any anomalies prior to them becoming a threat to the entire retail infrastructure.

What Are Smart Retail’s Benefits?

In its essence smart retail is an efficient, decentralized, and transparent process for the retailer and the supply chain in general. But, many businesses focus on tangible benefitsthat go over and above the general features. In this regard the benefits of smart retail are increased efficiency as well as quality and sustainability.

Self-adaptation and its impact on effectiveness is smart retail’s main advantage. If fully functional, effective algorithms have access to the ever-changing data stream smart retail can analyze and auto-correct to improve the sales and the adaptation process, and its output as efficient as is possible.

With smart retail’s capability to identify and fix problems before they’ve had an opportunity to become problematic, the end product is never likely to be affected. So the quality of any smart retailer’s work will be higher than those that are produced using non-smart methods that sometimes yield insufficient outcomes.

In the traditional sales and retail areas, interruptions have been reported to occur occasionally and can be caused by human error, environmental or accidental causes. The ability to adapt and self-correction process which are inherent in smart retail reduce the risk of human errors. The automation will result in improved safety and a longer-lasting output.

What Is Smart Retail’s Impact?

Smart retail doesn’t just exist by itself. Although its benefits and features have definitely changed the marketing and sales processes of retailers across the globe but its impact extends deeper than that. What impact will this latest technology revolution be having on the working population as well as the supply chain, and also on security? Continue reading to find out!

The workings of an industry are not able to undergo a major change without affecting the worker in any way. Similar to the past industrial revolutions, the function of the human workforce has evolved. The general trend is that the workforce will shift away from physical labor to technological support, which requires an understanding of technical skills.

In the supply chain, starting with warehouse management, sales and quality control the explosion of technological integration has forced adaption all over all. Because automated self-correction and smart retail processes are in operation constantly and across the entire supply chain has to be able maintain the same level of flexibility.

In this digital age data has been made available in a way that was never possible before, however at the expense of security. Protection of data has quickly become an entire industry as more organizations seek to protect their information. Smart retail, naturally isn’t immune to this problem, but it has prompted numerous corporations to find a solution as an important goal.

For a non-technical person it’s easy to think of the ideas involved in smart retail as complicated to the degree that they are abstract. But smart retail is employed in sales and retail across the globe. It could be utilized in your favourite restaurants and shops but you might not be aware of it.

In the United States, the supermarket chain Safeway employs a type of smart retail that rewards customers with discounts based on their purchases. It is delivered through the dedicated app for smartphones that tracks purchases made by shoppers. monitored using their registered phone number which is entered during the process of making a purchase. When logging into the app following checkout, said customer will be able to view personalised deals that are designed to draw shoppers back to the store to complete their next round of groceries.

Beyond customer service, Safeway also utilizes smart retailing by utilizing overall buying patterns as well as inventory monitoring to establish the best place for display items on a store-by-store basis. The principle of smart retail has been around for a long time. establishments across the globe, every square area of floor space can be an opportunity for revenue or nothing. With the introduction of intelligent retail methods, Safeway now has detailed store-by-store information that allows them determine the best way to increase the profitability of every one of the chains’ locations.