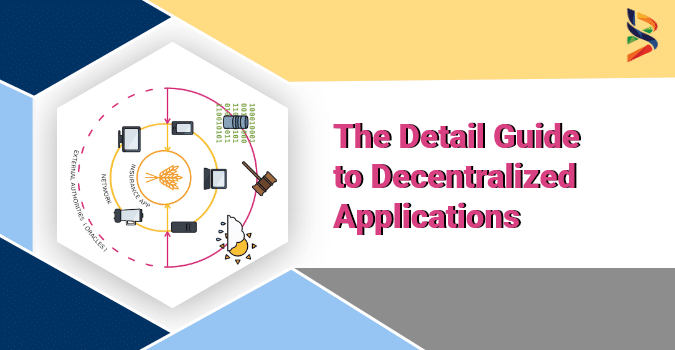 The Detailed Guide to Decentralized Applications

DApps, also known as decentralised apps are software programs with backend software that run on a computer network that is distributed. Standard applications, on the other hand, usually operated on central servers. DApps possess distinct advantages and advantages over central counterparts due to blockchain technology and other advancements. DApps, on the other hand, come with some issues at this point of development.

In this article we’ll explore what is it that makes DApps distinctive, what advantages they offer, and the obstacles they have to overcome to become an actual challenge to the centralised system.

What are Decentralized Applications ?

A few of the functions of dApps are :

Let’s examine the advantages of dApps once you’ve got a solid comprehension of the benefits of dApps.

DApps are a great way to get more benefits but Brisk Logic only briefly discussed a few advantages in the article, for instance

There is no downtime:

There are no limitations or downtime because it’s built on a peer-to-peer system of computers, not one single point of failure , such as hosting servers.

Data from apps that decentralise are stored in a ledger that is public that keeps track of everything in a safe and transparent manner that nobody can interfere with.

The code of open-source dApps is accessible for review. Since more inputs are available the ecosystem in general is more flexible, develops faste and grows more secure.

The user experience (UX) is an expression used to describe how people interact.Set up of the tools needed to communicate with blockchain in a secure way might be difficult for the average user and makes user-friendly experiences more difficult.

Since each peer on the network has to update their software for node and maintenance, troubleshooting or updating in a complicated system that is distributed among peers can be more difficult.

There are fewer DApps that come from third-party developers.

In the present centralised structure of the app that we have, it’s sometimes necessary to depend on third-party APIs to gather specific information from third parties. With DApps we don’t get this advantage since there’s not yet a massive 3rd-party DApps ecosystem.

What are the Differences Between Apps that are Centralised and Decentralised?

Centralised applications such as YouTube, Facebook, and Instagram are managed and controlled by a centralised system that receives requests from users, processes the requests, and permits or blocks access to data in accordance with the authority’s rules and conditions.

Given the widespread use of centralised applications and our familiarity with them it’s a question of whether we really need DApps in any way. The centralised model works perfectly and, in certain ways, is more efficient than the decentralised approach.

DApps as they are in their current state, are prone to a number of shortcomings that have to be addressed. They do have some notable advantages that indicate their huge potential, especially at this point in the development of DApps.

Let’s examine what dApps can provide and how they compare with their central counterparts.

One area where the decentralised applications succeed is within this particular area. DApps are innately secure because of their DLT roots. Decentralized solutions that are based on blockchain as well as other technology eliminate any single failure point that is a problem for centralised servers.

In addition blockchains and distributed ledger technology (DLTs) have robust consensus processes which makes them very immune to attacks from malicious actors. Another benefit to DLT systems is that they’re impervious to change, meaning that information stored on them can’t be altered or altered to any extent.

This is among the major issues facing the present generation of blockchain-based platforms and applications that are decentralized. The reason for this is the limitations of scalability in blockchain technology. This means that today’s blockchain networks have difficulty processing large amounts of transaction data simultaneously.

This can lead to congestion in the network, particularly when there is a lot of DApp activity. A notable example is the game of digital collectables, Crypto that was so popular after its release in 2017 that it was able to clog it.

The issue of scalability also leads to increased costs when making use of blockchain networks. Because processing transactions involves paying charges for miners and network congestion can cause substantial costs, since users have to pay more for your transactions to go through quicker. Ethereum is one of the most popular, and has a history of gas prices rising due to the large amount of traffic on its network.

Solving the issue of scalability has been among the top priorities of Blockchain enthusiasts. Ethereum is already home to a range of Layer 2 scaling solutions that have shown promising results.

Ethereum is also going through an important change, since it transitions from proof-of-work to a proof-of-stake, and in the process of introducing the concept of sharding. Both of these changes are in the context of Ethereum 2.0 project. They aim to make Ethereum more adaptable, and reducing costs for transactions and the power consumption.

One of DApps most significant advantages is that unlike central apps, they are free and unrestricted. Because decentralized systems that are public like Ethereum aren’t managed by any one, there is no way to limit access to a specific DApp. It also means that there’s no need for censorship in the decentralized applications. But, the nature of openness of dApps has more significance when it comes to its effect on the development aspect of the industry.

Being open source allows developers to build upon their work, and mix and recombine elements from different projects to develop new kinds of services and applications. This allows for innovation and the market to grow and develop in fascinating and often surprising ways.

DApps Today in the Real World:

Due to its capability of attracting talented developers and stimulating creativity, the blockchain industry has been the home of a variety of decentralized applications and developers are always looking for new ways to make use of the technology. There are numerous areas in which DApps are demonstrating tremendous potential.

The most compelling use case for DApps in the present DeFi applications are drawing an enormous amount of interest from investors, resulting in an industry that is in excess of $40 billion. The fast-growing DeFi sector is seeking to disrupt traditional finance by offering new methods to lend and borrow money, while also providing new financial services, such as the mining of liquidity.

Blockchain-powered solutions are able to transform a variety of industries and help companies improve their growth and operational efficiency. There have been DApps that are enterprise-grade creating a positive impact in various sectors, such as the management of supply chains, health and pharmaceutical.

As mentioned earlier the very first dApp to gain significant traction was an online game. In the wake of Crypto s debut, several similar projects have attempted to duplicate that game’s initial success. While none has been able to achieve the same level of popularity games such as Decentraland or Gods Unchained prove that there is still a significant need for DApps that play games. Additionally, the recent influx of tokens that are not fungible has shown the potential of digital collectibles powered by blockchain.

Augur is a prediction market that is decentralised built upon the Ethereum blockchain, which is open source. Augur lets users create market predictions on a variety of topics, like economics, sports, and the current news.

BitTorrent is a decentralised file-sharing app that is based on TRON. BTT lets users instantly upload or download data and from one another. BitTorrent is among the top used software for file sharing in terms of number of users, service quality, as well as the size of files. In addition, it receives 5.65 million monthly users.

Golem is an uncentralized marketplace for the rental of computing power. It is comprised of a node network that utilize Golem’s Golem networking protocol in order to exchange information.

Melonport is a decentralised cryptocurrency asset management platform that is based on Ethereum which can be open-source and distributed. Melonport automates the process of settlement and clearing, as well as monitoring performance and broadcasting verified records of transactions.

OMG network, formerly known as OMG network, previously called OmiseGo is a custodial-free scaling service that allows users to transfer ETH as well as ERC20 tokens quicker and at a lower cost than they would through an Ethereum platform directly.

Decentralised Applications have their own set of Challenges

Are you planning to create an DApp for your company? Brisk Logic can help! Managed app development is the best option for businesses who want to use DApps as well as blockchain technologies and our developers have extensive experience in developing applications with these factors in mind. Contact our experts today for a complete quote and build timeframe.

While blockchain technology has some development to do however, there is an argument for decentralized applications. As the technology develops, dApp development will only grow, allowing advanced applications to be built and new DApp categories to develop. It is still to be seen whether decentralized apps are capable of surpassing conventional apps, but it appears they’ll play a major role in the digital future.