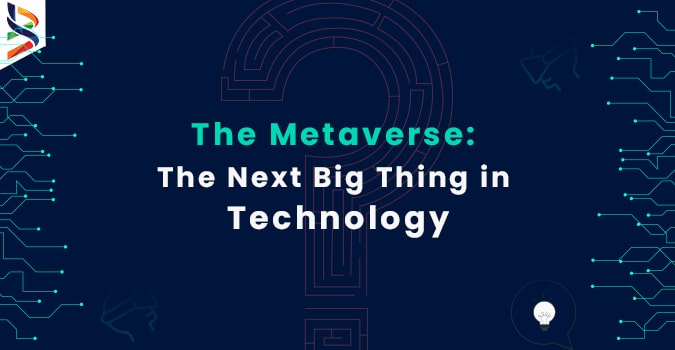 The Metaverse: The Next Big Thing in Technology?

Metaverse is an expression invented by Neal Stephenson in a novel called ‘Snowcrash in the year 1992. It was mentioned as a reference for a simulated 3D environment made up of avatars that were based on humans. In the past few months, the creator of Facebook, Mark Zuckerberg has discussed the concept of a metaverse as well as the ambitious plans being debated for bringing a virtual universe to life that anyone can participate in. The metaverse is believed to be the next version of the Internet which is built on the technology that is already in use to integrate all 3D virtual worlds to create a single virtual universe.

The role of AI in the metaverse

The current breakthroughs can’t be attributed to being a historical precedent as this leap in quantum technology is responsible for the growth of areas such as Artificial Intelligence, Machine Learning, Internet of Things. Artificial Intelligence (AI) is the main technology that will help drive the development, help, and aid in the realization of the idea of the metaverse. Its existence AI can be observed at every level of this shared 3D space. AI-powered systems are able to learn from information and become more intelligent through experiences, delivering a precise and personalized experience for users. These two elements are the driving force behind the development in the metaverse towards worldwide acceptance. and VR and spatial computation will bridge the space between the physical and the digital world, engulfing all aspects of our lives with technology.

Is it time for the metaverse to stop?

There have been many discussions regarding whether or not we are living in a metaverse, or will be a component of the metaverse in the near future. Some people believe that the universe is already here, while others think that the metaverse is still a notion of the future. If the path of AI is being considered it’s still in progress and isn’t at the point of no return. Innovations are emerging to the forefront each day and will continue to be so in the near future as we see AI racing to reach its maximum potential. This leads to the idea that everybody has yet to discover the full range of what AI can accomplish. The metaverse concept is similar to this It’s not even present yet, but is beginning to emerge to reveal the world’s inhabitants an alternative world.

The process of creating a metaverse is already underway and here’s a look at what the domains mean:

Inspired by films, the idea of presenting the larger-than-life gaming experience has led many brands to explore marketing to improve the engagement of customers. This efficient media-based advertising strategy can be a glimpse of the implications of the rapid growth of AI in this new industry.

People’s lives are increasingly dependent on technology and a large number of things are being influenced through the digital revolution. In this situation society’s values being able to meet the demands of the digital world is close at hand.

The people are already mimicking the lifestyles of the real world in the virtual world. The ability to possess things in this virtual world is already beginning with the concept of cryptocurrency, and NFT taking root in the lives of individuals. Direct-to-avatar’s business model (D2A) has been implemented at a massive scale, which leads to an increase in the amount of value that digital assets have. A world built on block-chain could soon be an actual reality.

Retail is experiencing radical changes thanks to strategies such as 3D visualization. AI-driven experiences in stores and Digital Twin stores are the top contenders to provide a customized, user-friendly and enjoyable shopping experience.

Mixed reality, the nebulous technology that has helped make a huge transformation possible is being used by a variety of companies to achieve the revolution people are dreaming of. The transformation brought about by the merging of the virtual and real worlds is prevalent across many cultures of today. The realm of art has also been affected by this phenomenon. There are numerous applications that let people make use of popular technologies such as Augmented real-time or Virtual reality to socialize with friends, play games outdoors or even work from offices. However, these applications are limited in offering just one feature at a time on the platform.

Metaverse can change this situation and bring everyone into a world where multiple technologies are used within a single setting for tennis. You can play on a court, enjoy an espresso with a friend who lives far away or even go to the latest movie in a theatre without losing connection. Let’s look at a metaverse scenario. Imagine that you would like for breakfast with an acquaintance and then go to an appointment with your boss right following that. You’d need to switch between different applications to prepare your food, and then access the applications. If the idea of metaverse becomes a reality it will allow you to perform these tasks in one permanent environment, without having to do anything. It sounds intriguing, doesn’t it?

The first step that could be taken to bring the idea of metaverse into reality is to link the power of social networks and virtual reality. This is precisely what Facebook is considering doing; implementing the concept of a Facebook metaverse. There are already plenty of industries that have embraced the virtual world however there are many obstacles that concern getting everyone involved in the technology-driven society where everything and all people are connected. There’s still much work to be done however, everyone has had an idea of what life in the metaverse could be like.

No matter what form the concept of metaverse assumes, AI would be a crucial element in helping concepts be realized.