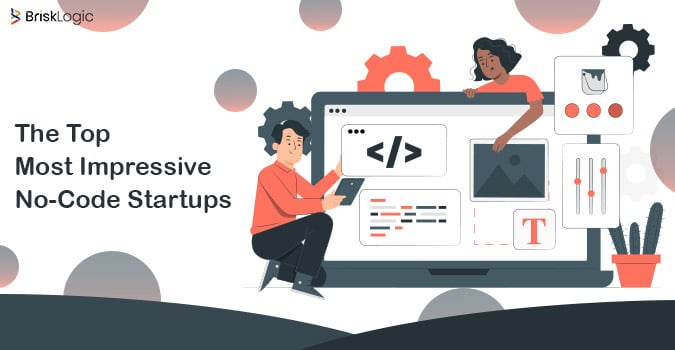 The Top Most Impressive No-code Startups

Gone are the days when entrepreneurs had to wait weeks or months for development teams to scope, spec, create, and test products before they could launch. The difference between successful businesses and those that fail in today’s fast-paced digital world is typically how quickly and cost-effectively they can get their product to market and iterate on No-code Startups user feedback.

The No-code Startups has arrived. It essentially does what it says on the package. To create complicated apps, automate workflows, and streamline business processes, you don’t need to write code. Non-technical founders and entrepreneurs can use no-code to create MVPs Minimum Viable Products with only the most basic functionality that early adopters can use.

This allows you to release a new product at a fraction of the price of traditional development.

Let’s take a look at some of the innovative entrepreneurs that have developed profitable businesses without using any programming.

The following points are of the most impressive No-code Startups:

BloomTech is changing the virtual education business after raising $4 million in preliminary funding. BloomTech is based on the ISAs (Income Share Agreements) model, which is unique in the industry. Students are not required to pay tuition upfront under this scheme. They commit to repaying 17% of their income for two years after graduation, but only if they find work.

The no-code movement gave birth to BloomTech, originally Lambda School. They used a variety of tools like Typeform, Airtable, and Retool to create their MVP, which now serves over 3000 students. To expand and scale the platform, they’ve incorporated Webflow, Salesforce, Calendly, and Zapier.

Comet is a platform that connects tech and data freelancers with businesses looking for experts and teams for specific projects. Employers on Upwork and Malt, for example, must sort through thousands of profiles to locate suitable candidates.

Companies can build teams on Comet as needed. They submit the task, and the Comet team will match the project with the appropriate freelancers within 48 hours. Comet also assesses a freelancer’s soft and hard skill sets to verify that they are a good fit for the job.

Comet completed over 300 projects for over 150 clients in 2017 using Bubble, a technology that allows you to create web apps without writing a single line of code.

Their monthly revenue has increased from $0 to €600,000. Comet received €2 million in seed funding in 2017 from Otium Venture and Kima, followed by an additional €14 million in 2018 from Daphni, First, and FJlabs. Comet’s long-term ambition, according to Charles Thomas, CEO, is to define the future of work for the tech and data workers in Europe and beyond. He believes that the future of work will be on-demand.

Kollecto is web software that allows art collectors to curate, share, and purchase art. Tara Reed, the company’s founder, stated that she intended to create a platform where ordinary people could connect with a personal art buyer. She didn’t have the means or connections to get her MVP built.

Kollecto is web software that allows art collectors to curate, share, and purchase art. Tara Reed, the company’s founder, stated that she intended to create a platform where ordinary people could connect with a personal art buyer. She didn’t have the means or connections to get her MVP built.

She built the Kollecto website using Strikingly, Typeform, Plasso, Stripe, and Paypal at first. She believes in releasing your MVP and iterating as rapidly as possible.

They’ve simplified the application process and tackled some of the most common home renovation concerns, such as bad contractors and red tape, by using Bubble. As a result, homeowners, contractors, and lenders may all benefit from a sleek, highly functional financial solution.

Dividend completed its fourth home solar loan securitization in San Francisco in July 2019. Dividend Finance issued $234,59 million in asset-backed securities, and its funding capacity under solar loan financing facilities with Citibank and Credit Suisse was raised to $350 million, according to Business Wire.

Dividend Finance, which is solely based on Bubble, has handled over $1 billion in loans, according to the Bubble Blog.

Makerpad teaches entrepreneurs how to construct no-code projects to save time and boost productivity. It’s a valuable resource for small businesses looking to create online tools, as it offers in-depth instructions on how to “make anything without writing code.” The crew is constantly updating the site, sharing new tools, tutorials, and guidance. There is also a vibrant community of people who are available for chat on forums, refining their ideas and offering advice and workarounds to one another.

It’s a great example of a no-code startup that made over $200K in revenue in less than a year. Webflow, Stripe, Zapier, Airtable, and Convertkit were used to create a no-code stack. Makerpad surpassed a milestone of 1000 pro members earlier this year, according to Ben Tossell, increasing its MRR by 75%.

In the 2019 Product Hunt Golden Kitty Awards, Makerpad was voted the best no-code product of the year, beating out Glide and Webflow. Makerpad was bought by Zapier, a popular No-code Startups automation tool, in March 2021, and Ben Tossell stated that “pairing would assist the team to carry the no-code revolution further than it could alone.”

Plato matches engineers with mentors from some of the world’s most prestigious businesses. They pair candidates with mentors who have dealt with similar issues and can offer practical help.

Plato uses Bubble’s no-code platform for their complete back office, as well as their tracking system and event-specific landing sites. It allowed them to pair engineers and teams with the best mentor for the job. Fast! Plato doesn’t only offer a suitable fit. They make certain that their match addresses specific obstacles or concerns, resulting in goal-oriented solutions. Plato is dedicated to developing the next generation of engineering leaders through its mentorship platform.

Building an MVP on Bubble can help entrepreneurs get funds, as it did with Plato, which was accepted into YCombinator, the world’s most prominent startup accelerator, with a portfolio that includes Airbnb, Reddit, Stripe, and Dropbox.

Plato’s Co-Founder and CEO, Quang Hoang, led a team to YCombinator acceptance in 2016. Plato was founded in 2017 as a result of his experience at YCombinator. Plato received $13 million in investment from YCombinator.

The No-code Startups revolution benefits and aids more than just startups. During a crisis or pandemic, it’s critical to get a project up and running swiftly. Ensemble19 exemplifies this. During Covid19, Ensemble19 was launched in just three days to assist local businessmen in surviving the pandemic. Individuals and businesses can use the platform to make donations or purchase certificates to use after the lockout when businesses reopen.

The platform, which was built entirely on Bubble, enabled over a thousand firms to finance over CHF 600,000 in less than eight weeks. Donations accounted for 47% of the funds raised.

Qoins received $750k in angel finance in June 2018. The bubble created Qoins from the ground up. “We’ve continued to use Bubble throughout important sections of our business, as it has enabled us to do things that we’d ordinarily need a bigger team of engineers to maintain,” said co-founder Nate Washington in an address.

Switchboard tried to put Ad-Screens on Uber and Lyft cars at first (the company was originally dubbed “Ads on Top”). They opted to focus on another problem they uncovered along the way after understanding how costly this would be.

David and his co-founder recognized that each ad-displaying “out of home” screen had its own piece of software, making it difficult to make modifications at scale, obtain basic ad data, or do analytics. It was also clear that displaying adverts based on dynamic criteria such as precise location or external events was not an option. The switchboard was born out of their recognition of an opportunity.

Switchboard enables integrating, scheduling, monitoring, and analysing a network of displays easier than ever. Switchboard would be used by screen owners to manage all of their screens in real-time from a single location. The switchboard was able to quickly become a lucrative SaaS firm with an exceptional rate of recurring sales thanks to a totally Bubble-based user interface.

It should be clear by now that the No-code Startups revolution provides enormous benefits and potential for both entrepreneurs and businesses. This is merely the beginning.

Brisk Logic is always on the lookout for like-minded no-coders and exciting projects to work on!