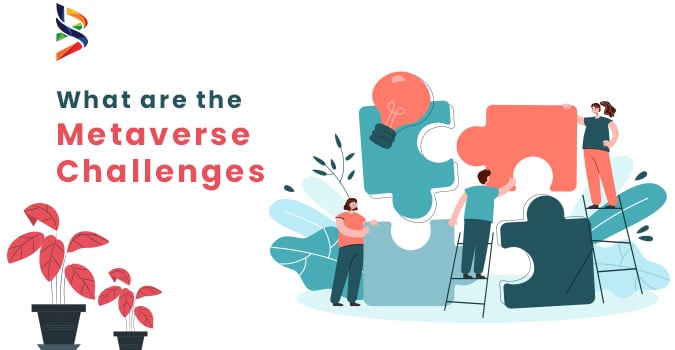 What are the Metaverse’s Challenges?

Metaverse is the latest tech news channel to be taken with it, and you can see the excitement increasing in the last few months. While Metaverse’s Challenges isn’t new and has been around since 1992 However, it is not all people are aware of the definition of the term. Oxford Languages define Metaverse as “a virtual reality environment in which users interact with computers as well as other users”. The question is what is the reason that has caused interest in Metaverse to increase at such a rapid rate?

The reason behind this rapidly growing interest is in part due to one or more of the major tech companies or more precisely in Mark Zuckerberg’s announcement in July about Facebook’s plans to build a future Metaverse. The Guardian revealed that the idea is centred around the creation of an all-encompassing virtual world, connecting people and products, commerce entertainment, workspaces, creators, and more.

How close is Virtual Reality (VR) technology reached the goal?

It is possible that we are closer to entering the virtual universe than we could imagine. VR headset sales continue to rise, with the potential to reach 34 million by 2024. The growth is due to VR hardware pioneers such as Oculus, VIVE, Varjo, Pico and many more. From the perspective of the software aspect of technology, we are seeing tech innovators who are recognizing the possibility of VR becoming a marketable product in the near future. The Unity Chief Executive Officer, David Sullivan, predicts Virtual Reality headsets becoming as frequently used as game consoles in 2030.

Today, it’s becoming apparent that many industries will continue to accelerate their adoption of the use of Virtual Reality technology. With 2021 set to be the year that will bring us many more VR devices targeted at both business and consumers – HTC VR VIVE, Pico Neo 3, HP Reverb G2 Omnicept Edition and Huawei VR Glass 6DOF Game Set. It’s just an issue of time until the Metaverse dream can be realized. At present, we have a very vague idea of what the real Metaverse would look like and, in order to make it an actual virtual reality is likely to be faced with the following issues:

Reputation and Identity in the Metaverse

The issue of identity and representation is quite simple in reality. However, when it comes to virtual worlds or the Metaverse, people might think about what would constitute the elements that define your identity. Most importantly, how do you be able to prove the person you claim to be, and not of someone else or even a robot trying to replicate your persona? This is where the reputation of a person is a crucial factor in both verification, and also as evidence that the person you interact with is legitimate and trustworthy. The biggest challenge is the possibility of forging facial features, videos and even voice. Hence, we will likely find new methods of verification being developed in the near future.

Data and Security in the Metaverse

Although organizations and businesses continue to revolutionize their IT security methods data security and privacy is constant issue for anyone who uses an online space. In the metaverse, we will require the evolution of security strategies to a new level and be at level with the ever-expanding world in the world of Metaverse. This will require the development of new ways of privacy and personal data security that can guarantee the security of your identity and belongings within the cyberworld. However, that personal verification could be pushed to the point that users have to supply more personal information than is required today, in order to verify themselves and make sure the security system is working effectively while keeping personal information secure.

It has been around with us for a couple of years in the past and Bitcoin is one of the most popular ones. It’s the same for marketplaces on the internet like Amazon or eBay which connect millions of users across the world. There is no doubt that Metaverse will be a unique version of a virtual marketplace that connects different real and digital currencies, allowing for quick and simple exchange. No matter what currency or market format for transactions, it is crucial to devise new methods of verification for transactions. The problem will be convincing the users to trust and feel secure when they engage in any transaction within the Metaverse.

Law and Jurisdiction in the Metaverse

In the metaverse, submerging can raise the issue of jurisdiction and legislation which will require nations to investigate the legal realms of virtual reality. With the increasing amount of virtual world available to users around the world it is essential to determine the means by which jurisdictional issues are applicable. Metaverse will surely bring a lot of people together creating an ideal place to exchange and connect yet it could make users vulnerable to risk if there aren’t laws that govern the boundaries. It is a really difficult task to determine the jurisdiction as well as to establish laws that will ensure that the safety of the virtual world and security for users.

Ownership and Property in the Metaverse

If we talk about a unifying virtual world where you are able to interact with the outside world and fellow humans just as you do in real life it is possible to imagine that there would be a chance to buy and keep possession of different assets and items. These NFTs ( Non-Fungible Tokens) have been gaining momentum and their rate of growth in popularity and are creating news in 2021, attracting many more customers and investors to digital tokens and assets. Similar to how NFTs represent tangible objects that grant and prove ownership rights to artwork video, music, and more The challenge lies to create a system that is able to confirm the owner of virtual assets within the metaverse.

Networks and Community in Metaverse

Metaverse is certain to bring people from different communities together and connect people from all over the world to create a united virtual world. As the last few years proved that being connected is among the most important aspects of society. This could result in a robust community forming in the metaverse to serve both personal and work goals. There are many people who believe the Metaverse may become the place to connect and build significant connections. We’re already comfortable with communicating online However, in order for the Metaverse to be an environment where people can be physically and emotionally present, motion capture and haptic technology have to be taken to a whole new level. A level that allows seamless perception of the present and surroundings, and visual quality and the capability to feel and touch.

Space and Time in the metaverse

The notion of time perception could be different when we contrast the real world with the virtual world since people are less conscious about their bodies within Virtual Reality. Virtual Reality. Immersion in the virtual world can result in users spending longer in the Metaverse. Because of the potential for an unrealized sense of time, it is crucial to create systems that keep people on track with reality. Another concept that needs to be examined in the Metaverse is the notion of space. Because the Metaverse is that it is an infinity space initially it may be difficult for people to be immersed in the vastness of space, trying to understand the volume and range of information available at the same time. Space perception and time in the Metaverse require guidance in the initial steps of submersion so that users are conscious and comfortable in the virtual world.

Although we’re just a few steps away from an imaginary universe making the Metaverse can be both difficult and full of opportunities. It is important to ensure that the Metaverse is a complementary space that does not replace the world that we reside in. While one may dream of the realm of virtual reality but it is crucial to be aware, secure in this huge universe.