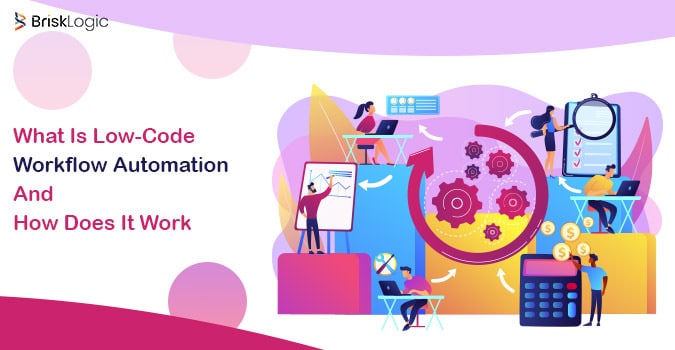 What Is Low-Code Workflow Automation and How Does It Work?

What is low-code workflow automation, and why is it becoming increasingly popular among businesses?

As more companies turn to digital solutions to increase the efficacy and efficiency of their processes both internally and externally, technologies like low-code are becoming increasingly significant, especially in terms of their position as a competitive differentiator.

We’ll discuss what low-code workflow automation is, how it’s being used by businesses, and what the future holds for low-code adoption among businesses in this blog.

What Is Workflow Automation in Low-Code?

Low-code workflow automation is a method for swiftly developing automation software to help with workflow activities and deploying it using a shorter development cycle than traditional coding and software development methods.

Unlike traditional techniques of application development, low-code uses a visual platform, allowing developers to use a “drag-and-drop” approach that is less reliant on traditional DevOps processes.

As a result, low-code workflow automation projects are less expensive and faster to design and deploy, allowing businesses to automate operations that were previously deemed insignificant enough to justify substantial investment in automation.

These tasks will frequently involve manual, recurring human operations—for example, data entry—but thanks to low-code, they can be more sophisticated in terms of the whole workflow.

Humans can be liberated from needing to perform menial chores as a result of low-code workflow automation, allowing them to be used more effectively.

Furthermore, workflow automation has numerous advantages, including improved visibility and oversight, as well as task uniformity for compliance purposes.

Low-code technologies have risen to the forefront of decision makers’ ambitions when it comes to digitally transforming their organizations or departments, as companies compete more than ever based on their capacity to exploit data and operate with strong, efficient, and rapid workflows.

It’s no accident that the low-code market has grown considerably in value over the last six years, as adoption among SMBs has become more widespread.

The benefits of low-code, such as the cost and operational advantages mentioned above, as well as the opportunity to involve stakeholders in the process right from the start due to the less code-heavy development cycle, have fueled this significant rise.

Many of the people working on these apps are “citizen developers,” who aren’t trained in software engineering but may play a larger part in the development process, shortening sprints and getting apps to market faster.

If low-code automation sounds suspiciously similar to robotic process automation (RPA), we should probably discuss the distinctions between the two.

RPA works best when it’s used to automate simple, repetitive processes, which it often does in isolation.

Because these jobs are usually predictable and routine, implementing a software bot to handle them is a relatively simple process.

Low-code, on the other hand, is best employed as part of a larger app development strategy throughout an organization. It, too, may be used to automate such simple operations, as well as to create new apps, optimize the use of current ones, and link legacy and third-party systems to more effectively transport data through workflows.

RPA is a one-and-done approach to automation, whereas low-code is more comprehensive, capable of handling more complex projects while providing more advanced potential for simplifying workflows across business lines.

What Are the Benefits of Low-Code Workflow Automation for Businesses?

The approaches to business automation differ greatly based on the goals of each organization.

Some companies may only need a basic software tool to link a legacy application into their cloud ERP, while others may be embarking on a hyper-automation process that aims to automate every relevant task continuously.

Use Cases for Low-Code Workflow Automation

This is especially true in areas like law and insurance, which still rely significantly on paper-based paperwork and workflows.

Companies can automate these procedures end-to-end by creating a customer-facing portal with a low-code app, with the consumer using easy and quick self-service software.

This means clients can do simple activities alone and let the automated workflow handle the rest, rather than waiting for a business human to assist them.

These automated approval process workflows can be as complex or as simple as needed, resulting in logic-driven results that reach the appropriate stakeholders at the appropriate time when the workflow’s process requirements are completed.

Scalability is also simple to achieve, allowing organizations to scale up or down the resources required to run the automation platform depending on how much they require at any one time.

Low-code automation can improve operational efficiency by automating processes from start to finish within a company, removing the need for manual intervention and reducing dependency on paper-based operations.

Low-code apps may be readily integrated into nearly any application, implying that they can play an important operational role in connecting business systems and automating data flows across them.

This is also a chance for businesses to ensure that they are complying with applicable legislation by establishing clear, standardized workflow rules and having comprehensive visibility into when sensitive data is delivered, where it is held, and how and by whom it is handled.

For firms today, legacy apps might be challenging to manage.

This is due to several factors, including its flexibility in terms of end-user ease-of-use, integration capabilities, and in some circumstances, a situation where the team that designed the programmed is no longer at the organization, leaving current employees with old, unruly technology. Users can continue to use the product after migrating—or porting—it to a low-code platform, with all the extra benefits that a modern low-code system provides, such as better automation capabilities, scalability, and remote across devices used for end-users on the go.

What are the Advantages of Low-Code Automation?

Because users don’t need a deep understanding of software development, low-code is simple to learn and can be used across the organization without the need for expert developers.

Citizen developers should be empowered

Because the software can be utilized across an organization without requiring IT assistance, individuals can construct their automated processes to aid their work.

You can save money on initial training, and you won’t have to pay a premium wage to get a talented developer. Additional cost reductions might be observed as a result of a faster time to market and a strong return on investment.

Intuitive features such as drag-and-drop interfaces help users to develop processes faster and see results sooner. Nearly half of all IT projects are beyond schedule:

Given the increasing demand on firms, this is even more surprising in today’s fast-paced corporate climate. Low code automation, on the other hand, provides pre-built connections and other tools to help with the development process. Firms may easily construct prototypes to test new ideas with these tools. As a result, developers are exempt from taking part in the testing and enhancement process.

Designing apps with low code is substantially easier as a result of these advantages:

Do you have any out-of-date systems in your office? They’re frequently shunned like the plague. Legacy systems can come with high maintenance costs and add to an organization’s technological debt. The good news is that with the correct low-code automation, your legacy systems can be easily integrated.

Embrace the variety of experiences:

Low code is required if you want your customers to interact with your company in the way they want. This is referred to as “multi-experience” by Gartner. Begin by developing one-of-a-kind omnichannel client experiences that compete with the leaders without the high costs or development teams.

Low code also thwarts shadow IT, which is the practice of unauthorized employees developing apps for use in their daily duties without the knowledge or consent of the IT department. It is straightforward to bring stealth development out of the shadows due to the low emphasis on innovation for everyone. When developing critical apps, business users can employ minimal code development to follow best practices and prevent frequent mistakes.

By applying creative, digital problem-solving solutions, a company’s capacity to adapt and respond to market changes and new opportunities is referred to as business agility. Businesses can swiftly respond to market fluctuations and changing consumer and customer expectations because of cheap code. You can, for example, create cloud apps that interact with each other.

Most transformation initiatives eventually aim for automation or digitalization. Low-code platforms make it possible to quickly design and deploy apps and processes. Replication is possible by taking the reusable elements and templates from this process and applying them elsewhere in the company.

Your community developers may also be able to assist you with the changeover. As a result, rather than relying on IT, which is likely already overburdened with other obligations and expectations, business users can design and automate their processes.

Ensure that Best Practices and Regulations are Followed

Because templates are so important in low-code automation, offering best practices for users to follow when creating and automating processes ensures that they are done correctly.

Because of the straightforward approach to creating and revising processes, you can make quick changes to your processes without worrying about changing complex code. This allows you to stay on top of regulatory changes, market developments, and client needs.

Organizations are approaching low-code workflow automation with more openness as they evaluate the capabilities of their existing apps and the efficacy of their present working methods.

While other automation technologies, such as RPA, allow for a lot of flexibility when it comes to automating small, repetitive operations, low-code allows for more chances to create end-to-end automated workflows across all lines of business that can be scaled.

Low-code also provides a lot of flexibility, especially when it comes to app migration and improvement, as well as significant levels of data compliance management.