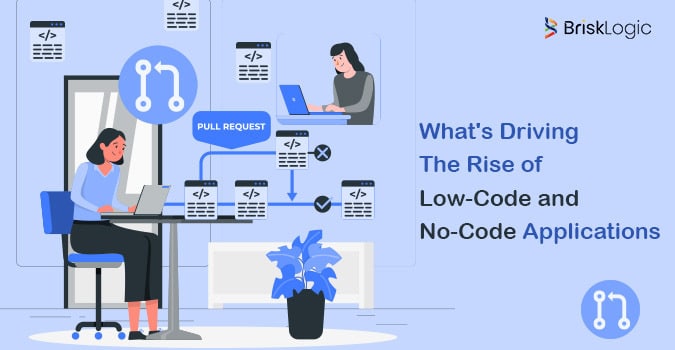 What’s Driving the Rise of Low-Code and No-Code Applications?

Low-Code and No-Code apps are fast becoming the preferred technology for many who work in today’s digital workplace.

According to the latest research by Gartner, 70 per cent of the new apps developed by companies will utilize low-code or zero-code technologies by 2026, an increase from less than 25% in the year 2022.

The rise of low-code application platforms which are also known as LCAPs has led to the growth of citizen-led development, as well as the rise of business technologists who work in departments other than IT and build technologies and analytical capabilities to support both internal and external business purposes.

This is changing the way that applications are constructed. The development of applications will shift towards the assembly process as well as integration as teams using these tools assemble and compose their components. In reality, the proportion of new applications created in LCAP environments will be far over the 70% figure predicted according to Gartner.

This should not be a surprise. The shortage of skilled workers in the field of technology have been documented extensively and, when it comes to application and platform development the issue is now urgent.

Recent research by Massachusetts-based Brisk Logic found that the need for developers has hit the highest level in IT professionals. Nearly six out of 10 (57 per cent) believe that the number of personnel required for the development of software is rising, and the cost of software development is increasing 61 per cent. For many companies, the answer is an LCAP.

According to Brisk Logic State of Low-Code and No-Code 2021 report, based upon an interview with 2250 IT professionals across six countries 77% of businesses have already adopted low-code to fill this gap while 75% of IT managers believe it’s a trend they cannot afford to ignore.

The study reveals the idea that low-code is helping companies accelerate their development by making it easier for software to be developed to be able to incorporate business users. Low-code, the report stated can help major software projects get back on track while making costs less expensive and taking advantage of the hidden technical talent that exists within the organization.

The Report’s other Significant Findings Are:

Two of five users who use low-code reported increased collaboration, faster development, and lower costs The low-code project can cut expenses by 53%, and occur 56% quicker.

Low-code solutions are increasingly becoming integral to the business process. When it comes to those using low code 33% have utilized it to create mission-critical applications.

Software developers recognize and appreciate the flexibility of this platform, stating that 50% of their routine development tasks (51 per cent) could be accomplished using a low-code platform.

There are many other factors that drive acceptance. Isaac Gould, the research analyst at Nucleus Research says that companies are focusing on the digital transformation of their daily activities and processes, many opt for low-code/no-code solutions due to their lower costs and reduced technological obstacles to access.

He also mentioned that companies that need flexibility and flexibility in their tech stacks can make use of low-code enabled technology called business processes management(BPM) or robotic process automation (RPA) solutions to digitize and automate business processes. Or, an LCAP to create enterprise-level applications internally.

Nucleus Research interviewed LCAP and BPM users and discovered professional developers can utilize these tools to accomplish tasks three to two times faster than traditional tools for developers. Low-code tools allow citizens and business users to share their knowledge to decrease the friction that exists between IT professionals and users, and develop standard processes or apps which require less IT involvement and are more appropriate to the user.

Every Business Is a Software Business

The final point is that each company has turned into an enterprise that runs software in the drive towards technological advancement according to Daniel Kirsch, co-founder of Cambridge, Mass.-based Tech strong Research.

“It doesn’t matter if you’re a farmer, a car dealership, or an HVAC installer, software runs your businesses,” he explained. “For instance, a farmer may need to develop a site for online order wholesale orders, or farms shares probably. The dealer for cars may need an experience that is friction-free for buyers while the HVAC installer would require an app on the go to give estimates.”

Kirsch said that even though the software may be dominating the workplace, there’s still an unending number of developers. Even the biggest financial services companies aren’t able to hire enough developers. However, it’s vitally important that software development is closely aligned with the business team. Software is developed to tackle business problems and to meet the ever-growing expectations of the customers.

In many ways, LCAP has a lot in common with other aspects of the technology for business landscape . The power is shifting away from internal IT teams, moving towards teams from the business. Teams don’t have to wait for months to set up servers. They simply need to make use of a credit card to access the cloud. In the same way, they use SaaS alternatives to test different software independently, often without IT’s approval. By using a low-code/no-code strategy businesses are able to develop their own software.

Demand for LCAP services is strong it is causing companies who aren’t able to make investments.

Recent deals like Goldman Sachs’ $90 million investment into the software maker with low-code WSO2 emphasized the growing trend towards cloud-based apps that have easy-to-use designs that make deployment easier to unprecedented growth and speed, according to Sanjay Brahmana, CEO of Reston, Va.-based Software AG. This is a venture that many companies will be monitoring closely particularly those most affected by technology skills shortages, but still, need to provide services to their customers.

Recent investments in low-code or no-code tools could be used as models to show how these platforms will allow organizations to rapidly ramp up mission-critical services. Brahmana claimed that a state-level government in Europe as an example has launched more than 800 applications in the past four years, using an application that resembles Lego, a low-code/no-code model to business groups.

“With the ongoing IT talent crunch, low-code solutions offer enterprise organizations the ability to increase productivity, consistency and quality, enabling organizations to stay in control of much larger projects than they could previously manage,” the CEO said.

Software democratization isn’t going to eliminate the necessity of IT departments, the expert explained. It is crucial that IT can provide guidelines and best practices on how to make use of these tools to prevent security issues or situations where software aren’t able to integrate or stop working completely, which can cause technical debt as well as structural weaknesses.

With changing, expectations of customers and the changing needs of markets following the pandemic businesses across industries have intensified their digital transformation plans.

They’ve recognized the need to speed up their rivals, create and release new digital apps and enhance existing ones with rapidity and speed according to Arvind Jha who is the senior vice-president of development for software at McLean, Va.-based Newgen Software.

There are several additional reasons for enterprises to look into the LCAP:

Low-code helps cut down on enterprise development time for applications significantly. The drag-and-drop capabilities of an LCAP’s online platform and the reuse of application components accelerate the development process. This allows organizations to introduce their applications quicker and implement changes at quick notice.

The digital native customer of today demands companies to provide experiences that they’ve come to expect when using apps for consumers. Low-code allows organizations to work faster with different services, which ensures an identical multichannel experience.

A lot of IT teams are involved working on data governance and application activities, which include security certifications, continual updates, performance measurement and compliance audits. A low-code platform allows IT or teams in the development and operations teams to manage their range of applications more efficiently with the full capacity for governance and compliance.

Low-code reduces dependence on third-party apps that can be quickly fixed and allows for a collaborative work environment. This decreases shadow IT and creates an environment for modelling that is standard through eliminating processes, data and security weaknesses.

Why Is There A Rise in ‘Low Code and ‘No Code Platforms?

These platforms are attracting attention from organizations looking to provide their software programmers with tools that can enhance efficiency and efficiency. It is hoped that these platforms can engineers improve their skills while also increasing their capabilities.

There are three major challenges with no code or low code platforms attempt to solve:

1. The pace of digital transformation is slow because of the high cost of maintaining traditional technology

2. The IT department isn’t able to handle the workload, This results in a slowing of the delivery of custom software.

IT Departments have to face the issue of a growing backlog, due to the fact that they don’t have the capacity to offer customization and features that satisfy internal requirements.

A major reason for the slow delivery of services is the growing gap in skills inside the department. Global Knowledge reports that more than 80 per cent of North American IT departments have skills gaps. In the world, IT skills gaps have grown by 155% over the last three years.

3. The rising skills and shortage of software developers.

Organizations are seeking strategies to tackle the lack of software developers. A greater emphasis is being placed on the improvement of learning and development strategies that help keep the engineering team’s skillsets flexible. However, there are some limitations to these strategies because the capacity for the development of applications is still limited.

Gartner states that the need for business-related applications is five times greater than companies’ internal capacity. The most significant reason for the limited capacity is the dearth of developers for software and IT specialists.