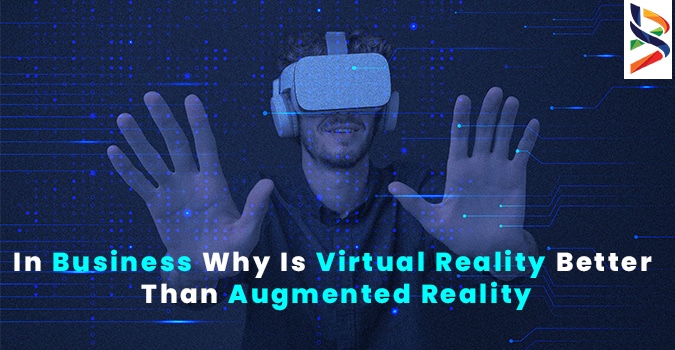 In Business, Why Is Virtual Reality Better Than Augmented Reality?

VR and AR are both exciting technologies. (VR) and Augmented reality (AR) offer exciting possibilities for the future of marketing, gaming, education, e-commerce as well as many other areas. Both are renowned for their enhanced experience, which combines two worlds: virtual and real-world with enhanced 3-D images. While it’s easy to confuse both, they have notable distinctions.

Nearly everyone who has a smartphone is able to gain an access point to AR. This makes it more effective than VR for branding as well as a gaming device. AR transforms the everyday physical world into a vibrant visual one through the projection of virtual images and characters onto the phone’s camera or viewer. Augmented reality simply adds to the real-world experience of the user.

Do you recall that Pokemon GO craze? It’s probably the most well-known application of augmented realities–technology that overlays digital data on the actual world. Instead of offering an immersive experience, augmented reality enriches the real world through text, images, as well as other digital information, using devices like heads-up display tablets, smartphones smart lenses, as well as AR glasses.

Augmented reality can be useful to do more than entertain. Retailer IKEA developed an AR application that helps customers visualize how the appearance of certain items will be at home prior to deciding to buy the items. It overlays digital representations of the products on the real-life images of the living spaces of customers. Alongside IKEA other companies from healthcare, aviation, automotive and tourism, as well as other industries, are working on augmented reality solutions.

Augmented reality technology could improve the experience of travellers in numerous ways. Imagine yourself on an augmented reality walking tour that you are self-guided and need to find out more about the structure of the building you see. With the help of an augmented-reality technology application, you can look towards the building and all the information will be projected on your view.

Because of apps like ARKit from Apple as well Google’s ARCore and the fact that smartphones provide a wide range of AR applications, more people who aren’t in the tech industry are acquainted with the AR experience.

Virtual Reality takes the components to the next level, creating a completely computer-generated model of an alternative world. These virtual reality simulations are able to create virtually any kind of visual or physical space possible for the user with the help of special equipment like headsets, sensors, computers and gloves.

The users are totally lost in computer-generated experiences as they go through virtual reality. Virtual reality is among the most widely known of all immersive technologies. While the gaming industry and entertainment were the early users of VR, VR applications are used today in a variety of industries and organizations, like military engineering and construction, education, healthcare as well as business.

If a person puts on a head-mounted display or VR headset, they feel — and their brains think they are moving around virtual objects displayed on the screen. Most often the headset is linked to a console or computer that allows for VR. Google Cardboard, Samsung Gear VR and Google Daydream it’s a smartphone that creates the virtual experience, whereas the Oculus Go headset can handle all of it since it’s a standalone VR headset.

Virtual reality software already helps surgeons plan their surgeries, patients can experience travel destinations even before taking flight and children are taught in an actual (but quite real) moonwalk and soldiers are trained for battle However, the coming years will be filled with even greater VR applications as companies of all sorts discover ways that to make use of the technology to improve their operations.

Since Virtual reality and Augmented reality is more integrated into how we interact, play and study, the market is only going to continue to expand. The digital design program offered by the Tulane School of Professional Advancement brings together design and cutting-edge technology to ensure that students remain at the forefront of these fields while turning their passion into a profession. Start by taking the first step to inquire for more information on SOPA today.

AR or VR: Aren’t They Same?

It is predicted that by 2030, VR and AR will generate an estimated 23 million jobs. Aren’t they both identical? Many think they aren’t. AR or VR are two different names for similar technology. However, there is a fundamental distinction between these technologies.

AR VR and VR are two different technologies that operate in different directions, executing different tasks. VR creates a virtual environment that surrounds a human being. AR enhances the real-world element in an existing natural scene. AR can produce diverse elements that aren’t typical of reality, for instance, animation characters. As opposed to AR, VR can create the entire scene from scratch, and also various characters, similar to video games.

Based on the purpose and specificity of the technology, their applications are different. As per AR Expert Michael Campbell, the most efficient use of AR is in industrial facilities.

He elaborates that AR technology can be most effectively utilized by businesses that are experiencing a shortage of workers. AR can offer the virtual experience of training and hands-on experiences to workers. It’s more effective than manuals written in words and oral training. For example, Honeywell uses an AR headset to train new workers. They capture the daily work schedule of veterans and then use it to teach new workers.

Contrary to VR, VR is most effective in creating illusions. VR can be utilized for creating 3D parts, for training as well as a virtual tour. For example, Johnsons and Johnsons develop VR programs to teach doctors and nurses. In the same way, Walmart uses it to prepare its employees to prepare for natural catastrophes.

What is the difference between VR and AR?

The debate over VR or AR superiority over one another is a long-running debate that has been in the news. These technologies have split tech experts into two groups.

Let’s talk about the importance of VR and AR in the field of business.

1. It Supports Try Before You Buy Concept

About 19 per cent of youngsters have experienced VR in various clothing stores. VR technology has revolutionized the idea of trial and wearing before buying.

VR can recognize voluntary movements and perform these based on what is predicted. sensors and screens that produce an image of the user, allowing users to test different clothes on them.

VR can also be used to create a digital representation of what the user is thinking as well, and these thoughts could be taken on a virtual tour by users. This is not possible with AR because it relies on natural elements that exist to make an imagined object.

2. It provides different degrees of Freedom

A Degree of Freedom (DoF) is defined as the various aspects by where a static object is able to move in 3D space. Simply put it’s the ability of human beings to move within an immersive VR space.

The VR technology lets users see in 6 dimensions. These dimensions are left down, right up, down, pivot left and right. The interaction between VR and humans is controlled by laser pointers and gaze control.

Industries use this technology on a bigger scale to offer virtual tours to their clients. Small-scale industrial companies are struggling to educate their workers since it is expensive.

Companies are employing VR headsets to teach their employees and cut down on the expense of manual instruction. The training in VR is 70 per cent more efficient, as opposed to other training methods.

The modern world is focused on data. But all the data means nothing if they aren’t comprehended. The VR provides a simple method of communicating collected data.

Organizations are using this virtual data in various ways. Smaller-scale companies are using it for contracting or alliances with other companies.

On the other hand, the vast majority of businesses are using it to promote their brands. Check out the following example where Netflix utilized the virtual world to advertise its series.

VR can be immersive and allows you to see multiple perspectives of the idea. This enhances the creativity of the project and boosts the possibility of selling. This is also utilized to reach across different segments.

The VR gives appealing content that draws a wider segment. Technology has led to an evolution in the advertising sector. It is true that AR is also utilized in advertisements, however, it isn’t able to create the same impact.

AR and VR for Business

It’s difficult to classify the effectiveness of one technology over other technologies. But from the perspective of business VR is a good technology to use. The primary reason is its financial impact. Utilizing VR to train employees can cut down on the expense of hiring the trainer.

If they are employed in advertising, the loss of valuable materials is reduced. Apart from that, it is also used to offer digital tours to real estate properties. This improves the chances of a buyer’s decision.

This is why VR and Ar are widely used by businesses as well as e-commerce sites too. As an emerging technology, augmented reality has shown significant promise for transforming the commercial landscape. Every industry has its own take on augmented reality. The future of AR, for example, is of special concern to the tech sector.