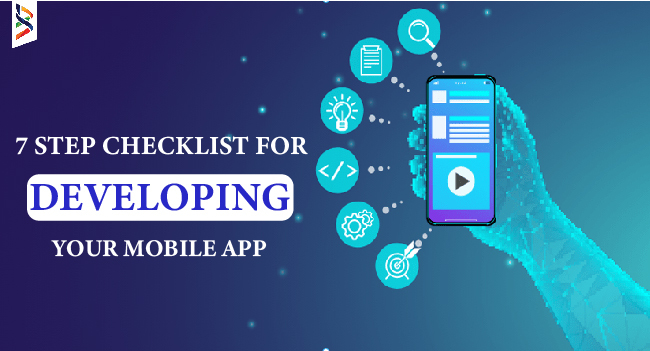 In a mobile app, If you’re considering launching your app marketing this app should be your next highest priority following ensuring that your app runs as designed. The preparation of the app’s marketing plan, however, will require a plan and a complete list of things to do.

Smartphones have gained a lot of popularity among users. The two platforms Android as well as iOS are enjoying the glory of success after winning a significant market share.

The rising use of smartphones has put numerous mobile app development companies in a position of honor, helping the most advanced mobile apps to give users an amazing experience.

There are specific steps to follow in the development process, from the initial concept of the app until its release, to ensure that it meets the needs of customers and is successful.

Read this short guide, which includes a seven-step checklist for bringing your idea for an app to smartphone screens.

Some of these steps may not be suitable for everyone, but you can choose the steps which best suit your needs or adhere to them to the letter!

Sometimes, the rush toward launching a mobile app in a hurry could have adverse effects on its performance and impact. In the end, your application is lost in the vast ocean of existing mobile apps that are available on both platforms like the Google Play Store and iOS App Store.

Consider, plan, and strategize and then join the marketplace of mobile apps to make a difference.

To aid you with this, we have compiled the following checklist, which is simple but important to follow that includes the steps to take prior to making the app available on the market.

Certain is the fact that after going through the various checkpoints with care and carefully, you’ll discover an avenue to the app’s success.

So, without further delay Let’s begin.

What is a Mobile App Development Checklist?

Why use a Mobile App Development Checklist?

The market for mobile applications is lucrative but extremely competitive. When the Minimum Viable Product (MVP) does not appear to be feasible enough, for instance, if it’s lacking in security or doesn’t meet the specifications of the app store, you’ll have a difficult time.

The “Why” Behind Each Step in the Mobile App Checklist

Download our mobile checklist for developing apps for you to share with your development and design groups (whether internal or contracted out) Read this post to learn the reasoning behind each step.

Here are some suggestions for developers as well as an initial checklist to help you get started.

It is the important step, in which you need to determine the function of your mobile application, its intended audience, the utility of the app, as well as the USP it’s going to have. It is important to determine if the app you intend to create is popular in the marketplace or not. Determining the goal in advance will help you reach your goal quicker.

Additionally, you should conduct some studies on other apps available in different online app stores. This will allow you to gain additional ideas regarding the features that could be integrated into your app, and also gain a more understanding of the user needs.

At this point, it’s also crucial to select the platform on which you’ll develop mobile apps: iOS, Android, Windows, or BlackBerry after weighing various factors and considering the pros and cons of each platform.

After conducting the necessary research and study, including the goals and requirements, as well as determining the platform of the app and design process begins.

One of the key aspects of the performance of your mobile app is its design since this is the stage that can be the difference between success or failure for your app.

The app developers must consider the design guidelines of different platforms when developing the application. The emphasis should be given to the use of color and the design of headers, icons, and buttons that make the app appear attractive. It is best to develop adaptive apps so that they can be used across different devices. Design should make an immediate impression and last on the minds of users.

It is vital to focus upon what is the UX part of the mobile application to ensure that it’s a success with users, as the app isn’t only about its appearance but also what type of experience it provides to the users.

The developers should think about multi-touch gestures to enhance the interface on the screen. Users should be able to move around the app easily. The most important thing is to create an app that is visually appealing, as well as user-friendly.

Once the appearance and feel aspect of the app is taken into consideration, the mobile app developers need to get to the actual development stage. This is the point where the coding process begins and the application is developed. This includes the creation of prototypes as well, to get approval from clients if custom apps are built. Developers should be aware of the most recent tools available on this mobile application platform as well as the programming languages utilized.

Developers can also connect their app to cloud storage on the backend, integrate web services and connect to payment gateways, social sites, and third-party apps, offering options like push notifications as well as user management. other features.

They’ll have to establish servers as well as databases, APIs, and much more, to ensure that the mobile app works correctly and provides the information required to users.

The next step is to conduct tests such as Unit testing, Testing for QC, and Testing for User Acceptance Testing (UAT).

Simulators are used to assist developers and designers check the application for errors and bugs. Testing makes sure that the app works correctly and is of top quality prior to its release in the app store for mobile phones. There are many tools to test mobile apps to find problems and to ensure proper functioning prior to their launch.

This marks the end of the development process, as the app is released and made available on marketplaces for apps on mobile devices. Different stores will have different times to approve apps. There is a chance of rejection, particularly in Apple Store, which will force the developers to build applications again.

The process of creating an app for mobile devices comes to an end!

Be sure that your app is well-marketed prior to its launch, to let customers know about the app. A mobile app can be created in a matter of minutes using these methods and learning from experience however the real problem is making the users aware and ensuring they install the application and download it! The process of marketing must be thorough and should usually begin about a month prior to the release of your app.

Semaphore Software has extensive experience in developing mobile apps and can satisfy the needs of customers around the world. The development team for mobile apps is highly skilled and competent employing the most modern tools to create world-class apps!

Get in touch with us through the Brisk logic site to get robust and dynamic mobile apps built for your business!

If you’re thinking of outsourcing the development of your app to a software development company There are a variety of things to take into consideration, from the experience of the team to their communication abilities and their cultural alignment. This is why we have put together a 10-point checklist to help you design an effective outsourcing strategy should you choose this option.

Be prepared and put crucial steps before you launch your successful application. Use the above checklist to understand the steps to follow to go smoothly with your app launch without encountering any issues. For more details on this, get in contact with Brisk Logic. It is among the top mobile app development firms that help small, medium, and large businesses launch their apps with a profit.

Chatbots With No Code: The Key To Customer Satisfaction?

Why low-code platforms are better than ERP software

Chatbots With No Code: The Key To Customer Satisfaction?

Why low-code platforms are better than ERP software