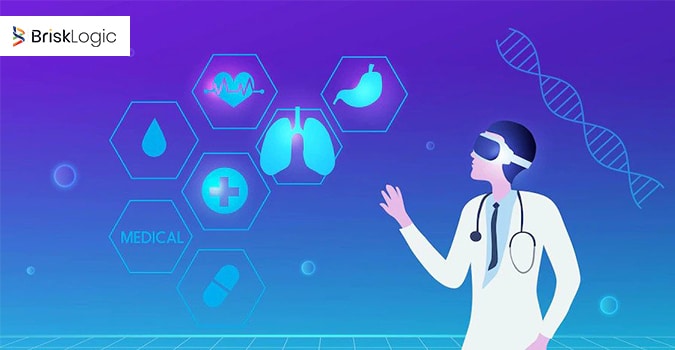 How Blockchain startups are reshaping the healthcare industry?

The most critical points to remember

Here are the most important takeaways from how blockchain technology impacts the health sector:

Supports confirmation, coordination, and maintaining a consistent adherence to protocols for clinical trials that have been approved.

Provides transparency and clarity in the patient’s billing via smart contracts that don’t result in overbilling patients.

Drug Supply Chain It allows you to accurately determine the origin of a medication and manufacturing history to identify an illegal drug or prescription.

The Healthcare Industry Is Being Disrupted By Blockchain Startups: 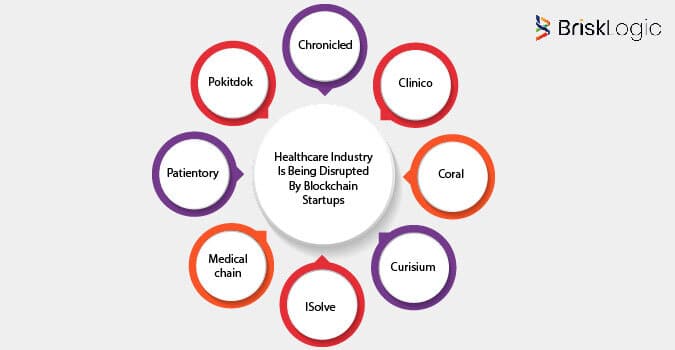 The company leverages blockchain technology and the Internet of Things (IoT) to provide a secure, smart solution for supply chains.

Curisium – Monitors the performance of contracts in real-time and in the future, and simulates alternative options.

iSolve is a complement to existing processes and systems to guarantee data integrity and provide an interoperable high-performance environment aimed at improving outcomes for patients.

A worldwide system for managing the health of the population that allows the users an access point to their personal health information.

Pokitdok Creates APIs for healthcare verticals, such as pharmacy, claims, and management of identities. The platform they offer, DokChain, is a distributed system of transaction processors working on both clinical and financial information from the healthcare industry.

Blockchain technology is already transforming the field of healthcare and aiding in the fight against its flaws in making medical care more personalized, customer-centric, easy to communicate with, and, consequently, efficient in the treatment of illnesses and impairments.

Blockchain technology in healthcare is new however, it is anticipated to expand to $5.61 billion in 2025 and continue to grow at a rate of double-digits throughout the process.

How Blockchain Startups Are Transforming The Healthcare Industry? 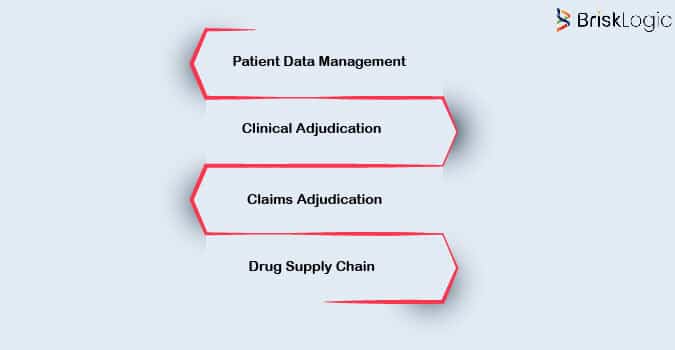 Below there is an Innovation Map highlighting the most promising areas for application and a deeper look into each section.

When it comes to managing data the healthcare industry is faced with numerous problems: from poor medical information transfer to personalized medical care, blockchain can assist healthcare professionals in handling these issues more effectively.

One of the issues that are often criticized is the lack of complete data ownership by the patient. Medical records could theoretically be used, shared, or used without the consent of the patient. Blockchain solves this problem by collecting patient information and keeping it in an organization’s internal database.

Additionally, by adding specific rules to these smart contact patients can provide their health information or sensor reads e.g. via their smartphone to their physician to help make long-term care more effective and individualized for the greatest outcomes.

Clinical trials form an integral component of any new medical device or medication. They are an extensive and lengthy procedure that takes a long time to complete and produce huge quantities of data.

The procedure itself is subject to particular scrutiny since the outcomes can determine the success or failure of a new device or drug. While doing so it can also undermine assertions made by manufacturers about the effectiveness of their product and how it affects human bodies.

The capabilities to verify the blockchain technology guarantee that all data that is stored on the ledger shared by others is accessible to all parties and isn’t susceptible to manipulation or alteration by either the creator of the ledger or by any other third party.

The healthcare industry is plagued with inefficiencies in billing patients and billing, with estimates of 5 to 10% of healthcare expenses being fraudulent because of overbilling and billing for services not delivered. Claims adjudication, for example, could be more accurate and more comfortable for the patient through automation of the entire process using blockchain.

The claims themselves are typically composed of complex (legal) terminology and are susceptible to interpretations that differ in courts. In the case of healthcare, this method is not a good idea, since the agreements can make the issue more complicated in order to make them legally valid. It is better to be focused on communicating the price of healthcare services to the patient in a straightforward and clear way.

Healthcare is constantly in need of tracking its supply chains throughout its entire life starting with a manufacturer and the supplier to the consumer. The manufacturer labels a manufactured drug by generating a “hash” as well as uploading that data to the blockchain. A wholesaler checks the substance’s provenance via the ledger. Prior to selling the product, the pharmacist is able to verify the product’s origin in the future. Also, anyone buying the product can confidently verify its source and manufacturing history.

Recognizing a fake prescription or drug within a brief amount of time doesn’t just benefit the drug retailers financially, but it could even save the life of a patient.

The magnitude of this issue is alarming, considering that the counterfeit drug business has expanded to become a $75 billion business on its own. Initiatives like that based on Ethereum MediLedger Project, which is supported by the industry’s top executives, including Genentech and Pfizer are already launching the first medicine tracking system that focuses on improving the supply chain of drugs and eliminating counterfeit medicines.

It’s an exciting time in the world of blockchain thanks to the rapid rise of bitcoin. News of fortunes lost and made have been splashed on the front pages of papers for months. However, the general public is beginning to realize the potential of blockchain more than helping smart crypto investors get wealthy.

A novel way to accomplish more than just data management.

Blockchain offers various industries an innovative method to store and manage data. It, therefore, is poised to revolutionize the industries involved and, in turn, the world, as Henry Ford’s assembly line completely and instantly transformed the automobile and, consequently the entire world.

Are blockchains less disruptive to healthcare than it is in the blockchain?

Perhaps no industry will experience greater disruptions due to blockchain than healthcare. The healthcare industry is a large amount of the country’s economy Centers for Medicare and Medicaid Services predict that healthcare spending will comprise more than 20 percent of the U.S. national economy by 2025. This industry has a profound influence on well-being. What can blockchain technology do to revolutionize and enhance the health industry in the coming years?

The days of doctors’ offices that had a huge room for filing with an individual paper folder for each patient have long passed. Electronic medical record systems are used by 96 % of hospitals as per Modern Healthcare.

They are basically a replica of the paper folders used before and allow doctors to track health information throughout patient visits and find various factors in the patient’s medical history. But EMR systems still have a major problem: they are often incompatible and institution-specific.

It was reported that the Review recently revealed that they have 26 EMR systems that are used by hospitals and other providers in Boston that each represent information in a different way. The issues of compatibility are annoying obviously, but they also hamper the information flow necessary to save the life of a patient.

As per Health Standards, blockchain could be a viable answer to the EMR issue. Blockchain is a central public ledger — similar to the way it is for bitcoin transactions. It serves as an immutable and complete record of patient information.

The Research Brisk Logic is being torn down by the Tears.

Healthcare data is a valuable item, but as with anything else of value, data can be hoarded to the disadvantage of the general public. Institutions’ data, when they block access to the public, hinder collaboration and exploration.

It could be a legitimate behavior for certain classes of data because of privacy concerns, however, many other types of data silos, whether as deliberate economic plans or simply the result of poor data management, hinder the advancement of research in healthcare.

With blockchain’s immutable public ledger research data that is stored on the blockchain is made easily searchable and accessible. Research efforts that are duplicated and “missed connections” are reduced or eliminated altogether with blockchain technology.

Let’s suppose that healthcare data grows more sophisticated and larger for every healthcare provider or researcher, there are now lots of compatible data to explore. Do you have other applications to use that data other than humans doing search queries? Absolutely. AI is being developed to aid in data analytics across many industries, such as healthcare. Machine-learning AI program is able to identify new areas of innovation when they sort through the millions of data points quicker than any human could ever. The data-sorting capabilities of AI are being investigated by companies like Google as well as Intel.

Some companies are introducing promising blockchain solutions for health issues. One of the most innovative startups can be found in Brisk Logic. Brisk Logic is developing a global, decentralized blockchain economy that could be utilized to store health information at the molecular level. They’ve joined forces together with Arm one of the largest semiconductor IP firm and has developed sophisticated chips that are smaller than one pinhead.

The system-on-chip architecture is used by doctors, researchers, and even “citizen scientists” in a range of devices and environments to collect information on health problems like superbugs and heart disease.

The information generated by the chip is stored in this Nano Sense blockchain, creating an immutable, globally accessible database of essential health information. Brisk Logic’s platform employs AI machines and AI to continuously study the ever-growing data set and improve its understanding with each new data it examines.

The AI will eventually be able to identify future trends and areas for collaboration for future research in healthcare and draw connections that human users may find difficult to discover in massive amounts of information. In the near future, breakthroughs in science could be created through a combination between researchers as well as AI.

Brisk Logic maintains its blockchain ecosystem by minting a specific cryptocurrency that is based on the data-gathering chip. Nano tokens are a form of currency that Nano tokens can be purchased and sold just like other cryptocurrencies and, inside the Nano economy, users are able to contribute funds to research that is important to the Brisk Logic economy.

Privacy and infrastructure development are two major issues to be overcome in blockchain-based healthcare disruption, however, they’re not impossible to overcome. The most important thing is to keep an eye on the top pioneers in the field of blockchain and are looking at the best possible applications of this cutting-edge technology. Brisk Logic is one of the innovators.