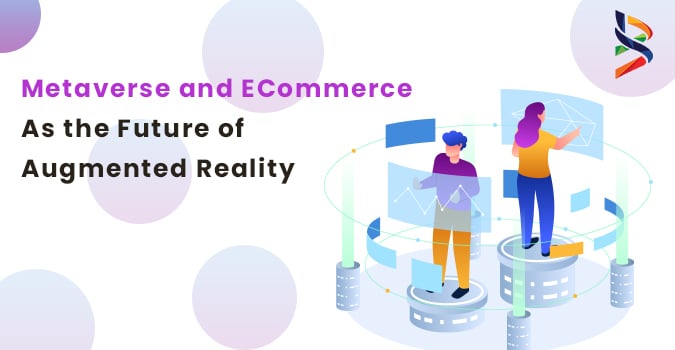 Metaverse and eCommerce as the Future of Augmented Reality

Augmented Reality has become an element in our daily lives at a rapid pace over the last few years, particularly thanks to smartphones and cameras. AR technology allows devices to see the world in the same way we do: visually immersive, and in three dimensions.

Let’s play a game before we get started Have you searched the term “shark” lately?

This isn’t a question we’re asking you to do this because we recently watched Spielberg’s Jaws. Google offers a small Augmented Reality surprise for you if you take a look: If you search for animals you’ll be presented with a page that reads “Meet a life-sized up close”. You can even choose a “View in your space” option! Wouldn’t you like to see how a gorgeous white shark might look at your cooking area?

Okay, but really, what’s the reason behind Augmented Reality?

The main benefit of using AR technology to sell products is it permits buyers to experience the product online. Other benefits include accessibility and portability. require a smartphone, or in some instances, AR glasses.

How can eCommerce stores make use of enhanced technologies?

Let’s look at the ways in which AR could help with eCommerce.

It is impossible to be sure how a garment will appear on you for certain unless you put it on. But this wasn’t an option for online shopping for a long time. In the past, online shopping usually went in this manner The customer would see a particular jacket at an online retailer and decide that it’s gorgeous on the model, and you’d order it. It would be delivered, and once you put it on, you’d discover that it doesn’t fit you in any way. You’d end up returning it. It was a waste of time! Then there’s the situation where you don’t even place an order because you’re not certain what it will look like, but you do not want to endure the hassle of returning it to find out if it doesn’t work for you. What happens? lower conversion rates.

This particular kind of AR technology lets customers test the product on, be it an eyeglass or a certain colour of lipstick. One of the best examples of this is from Sephora. They released their ” Sephora Virtual Artist” version of their app. The app makes use of facial recognition technology that lets you test out various cosmetics! Additionally, they offer customized tutorials in virtual form for you!

Then Google is taking things one step further by introducing Google Lens: Let’s say that you find an item you like while scrolling through your Instagram feed. Make a picture and then make use of Google Lens to see how others have done it! If you happen to see an item in the shop but you don’t know how to dress it. You just need to switch on the Lens and use your camera!

The purchase of furniture like a sofa or the dining table is a kind of a major commitment. Naturally, you are curious about whether it’s appropriate for the living space of your home.

Ikea’s “Place” app allows you to put their furniture within your rooms and has been available since the year 2017! In recent times, they’ve developed a different application that allows you to design your own space! They’ve worked with SPACE10 the Copenhagen-based futuristic living lab, to develop this project.

User manuals can be complicated and frustrating. The mere idea of black and white drawings tagged with numbers, as well as a lack of clarity in the instructions is disorienting. Who actually reads them? The good news is that AR is available to help make our lives more simple! These user guides that are interactive aim to provide users with…well interactive directions. They do this through digital images based on the way we see the world, and overlaying instructions, and of course by using advanced Artificial Intelligence. Interactive manuals can be particularly helpful for more complex products. Mercedes Benz is among the companies that first realize the value of AR manuals for customer support.

Have you heard of the Metaverse?

The concept “metaverse” was coined by Neal Stephenson in his 1992 science fiction novel Snow Crash, where human avatars and software daemons communicate with each other in a virtual 3D world. Since then, the metaverse idea is a common theme for dystopian worlds of science fiction in which the virtual world is a refuge from the unsavoury and corrupt reality. Think of The Matrix or Ready Player One. The term is now getting the attention of tech giants including Microsoft along with Facebook.

The metaverse version imagines how you as well as your coworkers may be in different areas of the globe and be able to meet in the same meeting room, instead of looking at the two-dimensional screen of your laptop using Zoom. With spatial audio, and all the other features to make it appear more real! Afterwards, you could have the coffee in an online coffee shop with a person that lives on the opposite end of this country! Then, at the end in Back to the Future I, Doc Brown says, “Where we’re going, we don’t need roads.” I’m sure this wasn’t the message the creators had in mind when they came up with the lines!

Zuckerberg declared that Facebook will be a “metaverse company”

Mark Zuckerberg announced that Facebook will become a metaverse corporation. The goal of Facebook is to ensure that it will not just be a social media business. There has been some criticism of Facebook’s metaverse, describing it as ” VR re-branded”. Of obviously the Facebook VR division Oculus along with their VR Network Horizons could be aiding in this quest. However, the objective is to develop a wearable device that’s comfortable to use outdoors like AR glasses, as per Facebook’s CEO, Mark Zuckerberg. Facebook CEO. Zuckerberg has previously stated that the next hardware launch of Facebook will consist of “smart glasses” in partnership with Ray-Ban.

He had referred to them as a “journey towards full augmented reality glasses in the future”. We first got a glimpse of this collaboration due to a leak prior to the official launch. Then, on September 9, Facebook and Ray-Ban officially revealed what they called ” Ray-Ban Stories”. Although they’re not the most advanced in terms of capabilities and aren’t as expected from the bold words of the Facebook CEO, they’re the most ordinary-looking smart glasses available on the market. The frames are constructed in the traditional style that Ray-Ban is famous for.

Furthermore, Zuckerberg seems to think of the metaverse as something far more extensive than playing video games using a VR headset. He’s talked about a new economy that is based around the metaverse. We’d be able to attend concerts artists of all kinds could create different experiences for the general public. We’d be able to take our clothes and digital objects along and even teleport to other places. Perhaps the vision that the Facebook CEO has in mind may not be that far off an idea for the future. The famous Swedish pop group ABBA have recently released their debut album The Voyage, nearly 40 years after they broke up! What a return!

The album’s release comes with an intriguing performance: The digital avatars of the members of the band will perform in concert with a live band! ABBA members have been transformed into their younger versions using motion capture technology that was developed through Industrial Light & Magic, which was created by George Lucas. It’s still unclear what Zuckerberg’s talking about however, we’ll be there faster than we imagine.

Marketing in digital form within the metaverse

According to Zuckerberg the primary source of revenue in the future will be advertising, just like the present. If his dream is realized, it could mean a new age for digital marketing. Sure, marketing has changed in response to technological advancements and trends however this is the chance to be the most significant change in marketing in the current era. Metaverse is the first step to alter relationships between brands and their clients. They’ll have to contend with a different reality as it were. Naturally, the shift is not going to happen in a flash. Brands will need to think of new and innovative ways of engaging with their clients, and this will take time.

Another crucial point is that metaverse will not be controlled by and operated by a single entity. The metaverse ecosystem will become a cooperative system, just like the Internet is today. In fact, the metaverse is being referred to as the thin Augmented Reality is no longer merely science fiction.

AR technology isn’t just a fanciful idea from the sci-fi genre. It’s a revolutionary and exciting technology for the online shopping world. According to a Google Consumer Survey, 66% of consumers believe they would benefit from using AR for assistance while shopping. Utilizing AR technology within eCommerce provides lower return rates for online stores as well as better customer support for consumers. It’s also a fantastic way to attract the attention of prospective customers to the company’s brand. The greatest thing about the various aspects we’ve talked about is that they’re extremely entertaining and enjoyable! Naturally, I’d like to see how each coffee table from the catalogue will appear in my living room! Also, of course, I’d inform my family and friends about this cool feature!

Augmented Technologies and the Metaverses:

We will certainly be hearing about augmented technologies and the metaverses more often in the next few years. A venture capitalist Matthew Ball wrote a nine-part essay that outlines a framework for the metaverse as well as what it could be. The essay mentions that Zuckerberg has discussed how technology and its applications do not always go as what’s being envisioned. Therefore, we’ll need to look forward to what the future and technology can bring to the metaverse and augmented reality.