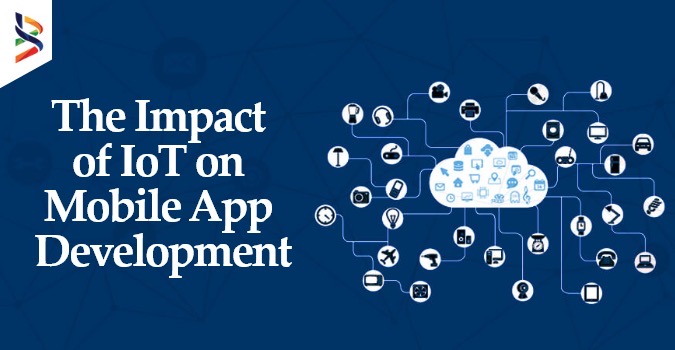 The Impact of IoT on Mobile App Development

IoT has witnessed a major increase in technology in the present. In conjunction with the potential of mobility the technology is expected to set new benchmarks in business efficiency, innovation and user experience. Developers are beginning to create applications that provide users’ needs and provide immediate access to their requirements.

Based on an analysis conducted by smart insights the majority of users used mobile devices to download apps on mobile devices. It’s no wonder that mobile apps have become quite popular and effective in the past few years and , with time, have begun to affect the expansion of the Internet of Things (IoT).

It is easy to find Iot companies developing IoT technology in every aspect of life. A few examples could be sensors-enabled bridges, buildings or pavements, as well as smart cars, appliances and devices; or wearables such as the Apple Watch, Google Glass or Fitbit. There is no secret that mobile apps are acting as bridges for technologically innovative companies seeking to develop smarter devices that can enhance our quality of life.

The increasing demand from end users has led app developers to adopt IoT. App developers everywhere are looking for the assistance of IoT developers to integrate IoT into their apps so that they can stay ahead the rivals no matter what.

IoT developers are pushing an entirely new level of innovation that allows any device, mobile or otherwise that is connected to an end user in any place that is powered by electricity, and be controlled by the existing technology. This is a new trend which is already affecting the way the end user lives and functions.

If we talk about the ideal illustration for IoT and mobile application integration, we have an IoT-enabled thermostat that can be used in office or home use. The app for mobile devices acts as a gateway or remote to control the thermostat while it serves as the IoT endpoint.

It’s not an unambiguous statement about the way IoT has affected on the mobile industry.By 2021, amount of mobile devices that are connected to IoT will likely to reach 1.5 billion. 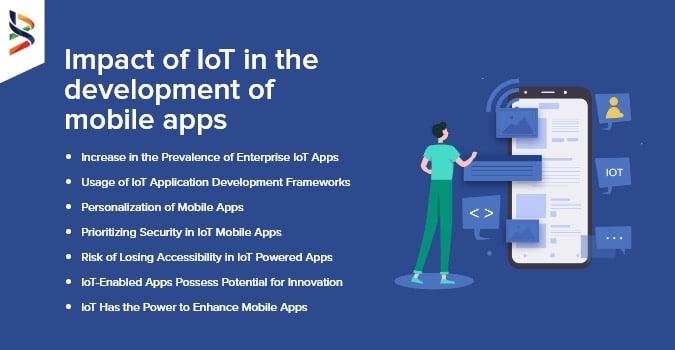 Impact of IoT in the development of mobile apps

1. Increase in the Prevalence of Enterprise IoT Apps

IoT devices collect vital data that can prove very profitable for businesses. Take a look at the most common uses of IoT applications:

The mentioned commercial IoT solutions allow for the collection of essential data that help executives in making the right decision-making based upon their company’s strategy. Due to these benefits IoT-powered devices are now widely accepted by companies around the globe. This is why demands for IoT app development continues increase.

The use of any framework for app development is not recommended for creating high-quality IoT-powered mobile applications. You should use the Iot app development framework to accomplish this. They can assist with a variety of crucial tasks, such as handling the huge amount of data, simplifying the process of dealing with devices and software components and resolving the complexity of the system technology, creating an app’s structure and implementing it into the form of a program, writing code to validate the app and finally the application is then deployed.

There are a myriad of IoT frameworks can be found to help with these processes. Each has its own advantages and is designed to meet the needs of IoT mobile Applications. Thus, programmers must pick the IoT mobile application development framework in accordance with the software they plan to utilize in addition to their cyber security requirements.

IoT networks can be capable of transmitting information to mobile devices in real-time. This information that is gathered from users via IoT devices allows for the personalization of the user’s experience within the app. As an example the smart kitchen appliances like the meat thermometer that is smart below, can provide individualized information to cooking or diet apps.

The continuous stream of personalized data that is delivered to phones of users is creating IoT applications a regular integral to the life of the users.

However, Iot mobile developers need to ensure that the mobile apps they design can analyze information of the users and making adjustments in their functionality according to. So, the amount of personalization of an application will directly correlate with the quantity of data collected.

Security has always been a matter of major security concerns when it comes to IoT connected devices. Since IoT devices are linked to the internet, they are a potential victim for hackers, as well as other security violations. In addition, their connection to mobile devices can increase the security risk even more.

However, there aren’t many cybersecurity practices that can be used to secure IoT devices. In addition, the installation of security measures for mobile devices is more difficult than desktops. Thus mobile app developers must ensure that their customers are familiar with security risks associated with IoT devices prior to launching their IoT mobile app.

IoT enabled apps need to be designed with care, or else the difficulty of the integration of IoT features can affect the app’s performance.

IoT App Developers will have pay close attention on the safety of connected devices as well as their capability to communicate with a larger quantity of IoT devices over the next years. In addition, when integrating other devices, the developers must concentrate on the user interface and interaction of an IoT solution. This is because, the less “new learning” a user must go through after the download of an IoT powered application, the more engaged they’ll be. It is no surprise that user experience is of paramount importance to IoT application solution providers.

The IoT-enabled augmented features of applications open up a myriad of possibilities to create new ways of engaging users. The data collected by IoT devices is able to be presented in a variety of new ways and can be used to help other functions of mobile apps. Additionally, there is the potential to integrate the machine-learning (ML) or artificial intelligence (AI) into the apps. Developers must begin the app development process in a positive manner in order to make the most of the opportunities that an IoT connection could provide.

7. IoT Has the Power to Enhance Mobile Apps

When mobile apps are connected via IoT gadgets, they could become more complex , yet more efficient. The app will benefit your business plan and improve the level of personalization that you offer your clients. However, the addition of IoT can also present security issues and create the possibility for a less user-friendly UX.

Let’s explore the impact of IOT  on Mobile App Development

The potential of IoT is that it encapsulates multiple apps and devices and acts as a single system for managing them the entire array. For example, mobile devices equipped with IoT capabilities let you turn on the light , track your cab, or even check on security cameras and so on.

The technology of the web and gadgets, IoT technology has been in a position to handle a wide range of the tasks that users have to perform.

The Shift in Focus

The previous program of app developers was solely focused on developing apps that were user-friendly. With the change in fashions the app developers are now focused more on the creation of IoT integrated app that aside from being user-friendly is also IoT loaded.

To remain ahead of competition and to provide users with modern technology, it’s essential to look at the elements that meet the expectations of users. The demands of the market as well as the user’s needs are kept in mind and the app is created with IoT aspects in mind in order to facilitate the life of users.

IoT is a promising technology that has many opportunities and potentials since its first appearance on the market. It has focused on offering the same platform for users who want to manage several devices. This has increased cost-effectiveness and ease of use for users who use the platform as well as app developers.

For instance, mobile apps development companies connect for help Beacon technology (a technology integrated with IoT that is connected to a specific place. If a device with a specific application arrives in a specified area that the beacon emits signals. The signal transmits information (for example, the form of a notification or alert on mobile devices) that allows for the benefit of centralizing appliances management by a single device in the same location.

To provide a clearer image to users, whenever they enter his home beacon technology within mobile apps emits signals and triggers notifications or alerts to carry out tasks such as turning on the lights, check the security cameras, etc.

Who doesn’t want to give fresh ideas a go today? Everyone is searching for solutions that can revolutionize how we communicate with each other. Technology is driving the demand and this has created the need for better solutions. Mobile app development companies have begun to utilize the latest technological platforms for users (UI/UX) with the latest technology to create hybrid applications.

IoT provides an unimaginable number of entry points that could pose a threat for the safety of applications. It becomes more easy for hackers to gain access to information and use the data in unethical ways. App developers should concentrate on increasing their understanding of cybersecurity in order to eliminate any chance of cybercrime.

It’s crucial to focus on developing an IoT embedded mobile application that is secure, safe and secure for users. Privacy of the user isn’t restricted at any point. Even with its security flaws businesses are looking at exploring IoT within their specific area of expertise and.

Companies have begun to use IoT enabled devices to provide an extra layers of security. Since no company is looking for cyberattacks security has been the primary topic of discussion when developing applications.

However, IoT could be useful in increasing the security measures by ensuring that physical devices be the primary point of entry , thus avoiding the most important and alarming experts regarding the threat.

Why We Are Here? For You!

With all the aspects considered It’s clear that IoT is among the most significant digital revolutions in the field of technology! It was first introduced when consumers were seeking sophisticated technology that can meet their requirements and improves their comfort. It is clear that the IoT mobile applications have been a major contributor to the marketplace across all industries.

Because mobile is one of the most practical and useful device used by nearly everyone, IoT has emphasized its importance on mobile devices while helping businesses and app developers, too.

Brisklogic is a well-known digital transformation firm that provides the latest technologies and development services.