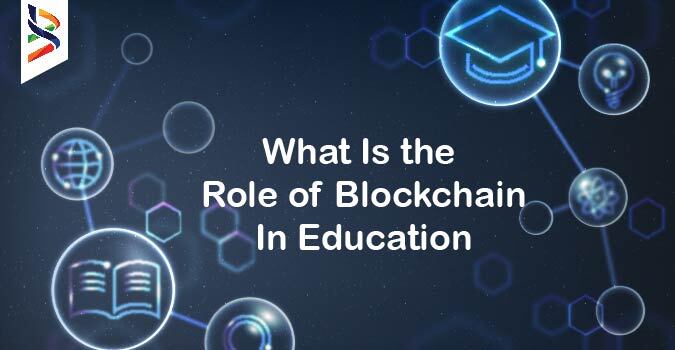 What Is the Role of Blockchain in Education?

Blockchain in Education is often connected with cryptocurrencies like Bitcoin. The data that is entered into blockchains is saved as blocks, which are then linked with chronological sequence, which makes it easy to trace the data’s source and proves its authenticity simple.

These characteristics as well as its decentralization have led to blockchain technology being used in various industries, including that of the financial industry. Based on the International Data Corporation (IDC) that worldwide investment in blockchain technologies across sectors is expected to increase from 4 billion dollars in 2021 to over 14 billion by 2023.

One sector in which blockchain technology is only beginning to gain traction in education. Blockchain use for education is still just beginning to take off with just a handful of institutions using the technology. A survey conducted in 2019 by research firm Gartner showed that only 2 per cent of higher education schools were applying blockchain and another 18% had plans to implement it over 2 years.

What is the purpose of using blockchain to store student data?

A common use of blockchain in the field of education is to keep records.

A college degree is possibly the most valuable student document. According to statistics from the U.S. Bureau of Labor Statistics in 2019, students with degrees from a bachelor’s program made an average of $500 moreover those who have only a high school diploma and the average unemployment rate for those with degrees was 2.2 per cent, compared with 3.7 per cent for those who have only graduated from high school.

In the last couple of years, digital diplomas have been the most prominent instances of blockchain technology that technology can be applied to education. In the year 2019, Maryville University became one of the first schools to use blockchain-based transcripts and diplomas, which allows students and alumni to control their academic certificates. Students can now control their credentials through the app for smartphones Block certs Wallet. With blockchain technologies, it offers an authentic, tamper-proof diploma that is easily shared with prospective employers as well as other schools.

The storage of diplomas on blockchain lets students own and control their academic accomplishments as well as the option of sharing them at any time and anywhere they wish. In the past is that universities were the sole owners of student records, which meant that students had to rely on their institutions to share and access their academic records and accomplishments.

Blockchain allows students to own their data and allows them to manage their school’s identity. This helps in proving the authenticity of their resumes much simpler for students seeking jobs for example as well as giving them more control over what employers have access to.

Institutions can benefit from Blockchain In Education

Blockchain-based diplomas issued by blockchain simplify the process of verification for institutions of higher education by reducing both time and cash. A recent study from The University of Rome revealed that the process of confirming diplomas costs the university 19,000 euros, which is more than $2000 annually that’s equivalent to three months of effort. Because they’re almost impervious to tampering the blockchain-issued diplomas help in confirming an individual’s academic history simpler for graduate institutions.

Employers can Benefit from Blockchain In Education

Blockchain-based diplomas that are digital helps in the hiring process for employers as well. Instead of asking the school that issued the diploma to verify an original copy of the potential employee’s diploma, employers need only an online link to access an electronic version. Due to the additional security offered by storing data on a blockchain, it’s harder for potential employees to fake their academic qualifications, ensuring employers that their new hires possess the required knowledge and abilities to be successful on the job.

Blockchain’s potential impact on education extends beyond the mere recording of information. Blockchain technology also could revolutionize the administration of the university curriculum. Blockchain, for instance, can provide secure storage options for digital syllabi as well as coursework. Institutions do depend on hard drives to store this, however, the possibility of damage to the drives or damage is a problem. cloud storage can be another alternative that could be too costly for certain institutions.

Blockchains can also make teachers jobs simpler through the application in the smart contracts. Smart contracts are lines of code that are programmed into a blockchain, which will automatically run when certain requirements are fulfilled. For example, a schoolteacher could program classes and lessons in a blockchain, assigning tasks to students. The blockchain’s smart contract will instantly verify the accomplishment of each task, and then present students to complete the task once the task is completed.

Teachers can also utilize the same technology to help grades. Teachers can program whole tests including questions, answers, as well as scoring guidelines onto the blockchain, and then have students take the test with tablets or computers. The blockchain will then take the responsibility of grading exams which allows teachers to have more time to pursue other academic endeavours. In addition, the score of the student becomes part of their academic record that is stored in the Blockchain.

Blockchain could also enhance your online learning by enhancing the process of accreditation. The ease of online education could cause unaccredited or uncertified organizations operating on the equal playing fields with well-known institutions, which could pose a threat to online students. Accreditation records using blockchain provide security and transparency.

Blockchain can also serve as a decentralized platform to allow institutions to exchange information on online programs and courses. Students can provide reviews of online courses and help other students locate accredited programs that can help students in their studies.

Blockchain could alter the landscape of education by allowing alternative, cheaper routes for learning, and also disrupting the relationship between students and schools. Controlling tuition costs for students is a labour intensive task that involves multiple parties parents, students as well as scholarship foundations, private loans firms, state and federal institutions, as well as the often-spread administrative burden of the university’s financial departments. Blockchain could streamline the process, cutting down on the administrative burden and possibly lowering the cost of tuition.

The technology is currently employed in pay-as-you-go courses as well as other open learning scenarios, that rely on the implementation of smart contracts, and making use of cryptocurrency as a method of payment. Since student loan debt is now greater than $1.7 trillion within the U.S., according to the Federal Reserve, millions of individuals could be looking for alternatives that can make the college educational experience more affordable and accessible.

Blockchain is a key Component of Research at Universities.

The two main objectives of higher education are to impart knowledge to the future generation of students and to improve current knowledge through cutting-edge research. Professors devote a lot of their time conducting research that is original and publishing their results expanding the limits of their field and uncovering areas of research that will guide us to the future. Importantly, the dissemination and influence of these research papers can impact professors’ capacity to secure important grants to fund their future research.

Authors have a legitimate interest in keeping track of how their work is utilized and safeguarding it from blatant piracy. Blockchain could allow researchers to publish freely however in a manner that allows researchers to track their research’s reuse, such as how often the work is mentioned and used in teaching materials as well as a way to track its impact on the subject and crucial as that could result in awards and funding in the future.

The Challenges of Using Blockchain in the Field of Education

Despite the potential advantages of blockchain technology, its adoption is still a bit sporadic in the sector. About 50 per cent of respondents from higher education of the Gartner survey reported the lack of interest in the use of blockchain.

The reason for this may result from the issues in implementing blockchain technology, which includes issues with

While security is one of the most important features of blockchain, it does not mean that it is immune to it. Due to the sensitive nature of the data that is stored on blockchains -the student’s educational documents and academic credentials institutions must be aware of the data they keep and the method they use to keep it. Compliance with federal and state privacy laws could pose challenges. Universities might need to adopt more secure privacy measures, such as user permission or private blockchains or encryption of information stored on blockchains.

Educational institutions have a huge quantity of information about their alumni and students, which could make scalability an issue when using blockchain. As the amount of the data is increased and the amount of blocks required is increased it can slow down how fast transactions are through the blockchain system, since every transaction requires peer-to-peer verification. If it is implemented to a broad extent, this can become an issue. The bright side is that blockchains that are permission have a higher number in terms of transactions per second as compared to the blockchains without permission.

Similar to other technologies before it, blockchain can only be used when enough employers and institutions are willing to trust it. Graduates only gain by having their credentials recognized when the institutions or schools that they’re applying to acknowledge their legitimacy. However, with hundreds of schools already offering blockchain-based credentials and several job sites such as Upwork and ZipRecruiter to promote their use, they could soon be the norm instead of the exception.

Although it may result in savings in other fields, embracing and implementing new technologies could be costly. The costs associated with computing power as well as the change of infrastructures can be costly. In addition, some institutions lack the skills and knowledge needed to handle student data on a blockchain-based platform. Therefore, they might require the education of school administrators about how to make use of the technology, which can cost both time and money.

Examining the Impact of Blockchain on Education

Despite all the challenges, organizations like those the U.S. Department of Education’s Blockchain Action Network and the American Council on Education’s Blockchain Initiative (EBI) are currently exploring the potential use of blockchain in the field of education and how it could transform the field. Education Blockchain Action Network brings administrators, educators students, as well as technology developers to explore the ways that blockchain technology can impact how education is going to be short. It is a “shared, community-driven, action-oriented space” to discuss and open-source project development the network acts as a central point for all participants in the blockchain space.

A Method to Simplify Education

Blockchain is currently changing the way we conduct business through the use of cryptocurrencies. This technology has the potential to change the way we think about education, making record-keeping and sharing easier as well as enhancing security and confidence, easing the hiring process and giving students control to their educational records for the rest of their lives.